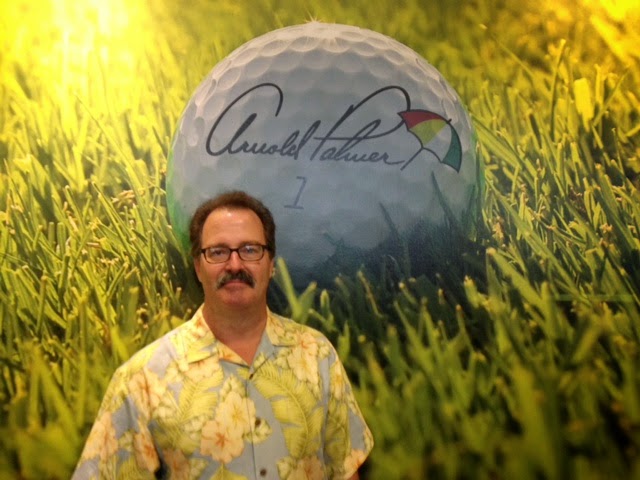 “Help! My daughters cast a spell that turned me smaller than an Arnold Palmer golf ball and there’s a grasshopper coming to eat me!”

I wish I could have shared that line with you earlier this week, but I’ve been busy playing tour guide.

That’s what happens when you live in Latrobe when the Pittsburgh Steelers are in town for training camp.

The picture was taken behind the front desk of the Marriott SpringHill Suites hotel, a place I’ve spent so much time the staff is starting to ask me when it’s my turn to bring donuts.

It happens every summer. Out-of-town buddies plan a Latrobe pilgrimage to see the Steelers, play golf and meet Arnold Palmer.

They expect me to arrange all this.

I try my best.

The Steeler camp, man, that’s a cinch. They let anybody in.

It gets tricky when they want me to arrange golf at Latrobe Country Club and introduce them to Arnold Palmer. They think we’re so buddy-buddy I can invite myself over to Palmer’s house for drinks after a freebie round of golf.

If I were that close to Palmer I’d devote my entire existence to conniving a way to get him to alter his will so I’d get a healthy cut of it for my greedy little self.

But sometimes that’s the way it works out. Just this week I had a friend from Florida visit. We’d met a couple years ago on a Mississippi golf trip. We hit it off and made plans to stay in touch.

He’s Andy Reinstetter and has what most consider a dream job. He travels the globe golfing for free.

His AndyGolfTravelDiary blog does well enough that he can usually secure free golf from top clubs and lodging from sympathetic hotel GMs.

He once had a traditional corporate job and one day woke up and said, “Screw this, I’d rather golf.”

He doesn’t earn much loot, but he’s one of the most cheerful and self-fulfilled gentlemen I’ve ever met. And he’s the biggest golf nut I know.

How big? During the day when I toured him around Latrobe he wore knickers and carried a hickory shafted golf club everywhere we went.

Needless to say, I didn’t take him to The Pond.

We spent Wednesday night at the Marriott and met Jimmy Robinson, a former NFL wide receiver who showed us the knuckle-busting Super Bowl ring he won coaching the ’11 Green Bay Packers.

He was so friendly I barely begrudged him for beating the Steelers that year to win the ring.

We couldn’t golf the next day because the club was hosting a political fundraiser U.S. Rep. Tim Murphy, but I was able to get Andy a full tour of the Palmer offices, the warehouse and clubhouse.

And, yes, he got to meet Arnold Palmer.

I was personally thrilled to meet Murphy because how often do any of us get to in person berate a House Republican? He was all by himself on the putting green (the other golfers had already started their rounds).

And I did, indeed, give him hell.

He started right in with the friendly chat and cut him off and said, “What are you, a moderately conservative Republican, doing to earn the support of someone like me, a moderately liberal voter, who thinks Tea Party conservatives are the biggest obstacle to sensible governing?”

He told me he’s concentrating on issues important to our district and that he, a practicing psychologist, is on the forefront of improving America’s mental health.

I told him about my book. We exchanged cards. I’m going to send him a copy of “Use All The Crayons!” and a request that he put me in touch with mental health groups that need lively speakers.

I told him helping me would be a practical two-fer: He’d be improving America’s mental health while simultaneously boosting the humble fortunes of one of his district’s most beleaguered taxpayers.

Andy was taking the notes the whole time. He does a lot of that. That and taking pictures. He’s going to do a segment about me and his visit to Latrobe.

He left Wednesday, about six hours before the arrival of my nephew and his girlfriend. Their three-day tour concludes Saturday.

That should be it until next summer when it’ll start up all over again.

I’m, for now, glad it’s about to end. I didn’t earn any money the last two weeks spending so much time pretending I’m a Latrobe tour guide.

I’m eager to get back to again not earning any money pretending I’m a Latrobe writer.

Welcome Steelers & fans back to Latrobe

My hands are beautiful to behold