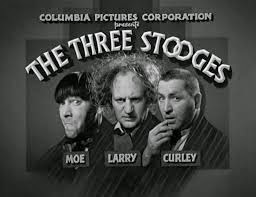 I hate starting the week without posting something fresh. But today’s the first day of school and then I have a 10 a.m. interview with Arnold Palmer, thus today’s a bit of a jumble. So here’s a compilation of some of my best Stooge tweets from the past six months.

I realize this appeals to only a razor-thin margin of my razor-thin readership, but I hate it when anyone thinks I’ve taken a day off. Say what you want about The Stooges, but there was never a film of them just sitting around loafing. They were always doing plumbing, farming, running a deli, chasing mummies, etc. The Stooges lead very active lives.

Tomorrow, a full report on my Arnold Palmer interview, which is secondary to my main selfish purpose for being there. He’s already agreed to cameo in my next YouTube promotion so the big news is today I get to “direct” the great Arnold Palmer.

He’s about to learn when it comes to self-promotion I’m a tyrannical perfectionist, not what anyone would expect from someone who doubles as a Stooge scholar.

• The only time it’s proper to say someone’s been “jarred” awake is when Moe does it to Curly and it involves an actual jar.

• Anyone care to guess the identity of the favorite Stooge the girl Billy Idol sings about in "Rebel Yell?" That's right. It's “Moe! Moe! Moe!”

• Watching Three Stooges short featuring the boys playing with a monkey. If Homer Simpson cameos it will be a comic collision of historic proportions.

• Tomorrow is Father's Day, the one day of the year when my daughters don't instinctively treat me like Moe treats Curly.

• If they’d have lived during Roman times, Augustus Caesar would have referred to Moe, Larry and Curly in Latin as “Tribus Stooges”

• A mohawk is a colorful hairdo. A Moe Hawk is an irrationally angry bird that inflicts slapstick violence on a Curley Hawk or Larry Hawk.

• “It’s a mystery why anyone would opt for Oreos over Double Stuffed Oreos. It'd be like choosing to watch a skit featuring The Two Stooges.”

• In the near future, brain transplants will be elective surgery. What kind of new brain would you like? More appreciative of art? More scientifically inclined? Me, I'd like one that doesn't become immobilized when it becomes aware there's a Three Stooges marathon on

• If we've learned anything from watching today's "Three Stooges," it is to never say, "Here! Take mine!" whenever Moe asks for a hammer.

• I wonder if in the Three Stooges scripts when it called for Curly to laugh it actually spelled it out, "Nyuk, nyuk, nyuk.” Heck, I’m not certain The Stooges even had scripts.

• Another great thing about watching The Stooges: takes mere seconds to say what happened anytime someone walks in & asks, “So, what’ve I missed?”

• Tennessee friend of mine said he saw a vanity plate that read, “NYUK X3.” Said it took him a few seconds to get it. Me, too.

• Through all his enraged violence against Larry, Curly and Shemp, Moe Howard never once went for the groin shot. Know what that means to me? Moe was at heart a gentleman.

• Here’s how much my wife respects my intellect: she just asked me who was the last Stooge to die (It was Joe DeRita, but purists say it was Moe in ‘75).

• I may not be the world's best father but I never said, “I have a good idea! Let’s let The Stooges babysit the kids!”