Arnold Palmer (& you?) starring in my next video promo! 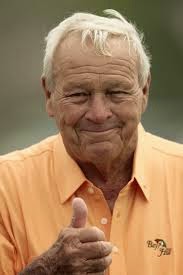 (668 words)
As far as casting concerns go, I’ve already secured what to me is the Brangelina of cheesy YouTube promotions.

That’d be Arnold Palmer and Doc Giffin (Palmer’s assistant for the past 45 or so years). Both men on Monday filmed their 20 second parts to appear in my new production.

Now, with those two in the can, I believe others will be more eager to participate.

See, I’ve been brainstorming up an idea for another video I can send to prospective event planners who might consider having me come in to speak to their groups. I thought it would be wise to this time have other people saying nice things about me and “Use All The Crayons!”

Thus, after my last speech before 100 teachers at the South Side Area School District, I asked a staffer to approach attendees and with my camera pointed at them ask, “So, in 20 seconds or less, what did you think of Chris?”

Happily, he got about a dozen people who said things like, “Oh, he was very funny!” “He has a great uplifting message!” and “He was wonderful!”

And, inevitably, he got about the same number of people who said, “Get that camera out of my face right now!” before he was chastened into giving up.

It dawned on me I could probably get about 100 people to say nice things about me and the book, but that would be boring to each and every viewer. Everyone but me, really, and I’d watch it over and over so many times the numbers might fool people into thinking the video’d gone viral.

So I thought it’d be fun to ask the guys in the bar to answer the same question, but with, “He’s cheap.” “He has a bad haircut.” “He borrows tools and never returns them.” And my family saying I’m a great big meanie who always cracks myself up every time he farts at the dinner table.

And, yes, I did consider making a video of me repeatedly farting at the dinner table and cracking up as my next promotion.

Then I thought it’d be cool to have Palmer, who graciously provided the cover endorsement — the only non-golf lifestyle book for which he’s ever done this — saying, “Who’s Chris Rodell? I said WHAT about his book?” and “Who let you in here?”

And that’s exactly what he did. I’ll cut that up into three distinct clips and scatter them throughout the video — as soon as I master video clip scattering.

Doc played ball, too. He agreed to read, “I’ve golfed with Chris Rodell. He can’t drive. He can’t chip. And he can’t putt. But if CBS ever needs a replacement for ‘Survivor’ host Jeff Probst then Chris Rodell’s the man!”

In my mind, I see it all coming together brilliantly.

Of course, 20 years ago I thought that same thing about my career and you can see how well that’s working out.

I’ll continue to glean authentic comments from my presentations, but hope to spice things up with more fun cameos.

And I invite you to participate. Just film a little selfie (or have someone else film) saying something either flattering or absurd in about me or the book.

If you really loved the book, just say just that. If you bought it for a friend who’s sick because you thought it would cheer them up, say that in 10 seconds and I’ll include.

I want to get clips of people who bought multiple copies — from 5 to 250 — to testify.

And I want to continue to get jiffy little clips of people saying:

“He has great posture!”

“I hear he spends hours staring at his ant farm!”

Silly stuff like that. But keep it short, please. And family-friendly. Send video contributions to storyteller@chrisrodell.com
Of course, don’t feel like you have to do anything. Just showing up here to read is plenty.

And I wouldn’t want anyone to say in 20 seconds or less, “Geez, that guy is really pushy.”

You Tube Promotion: “Use All The Crayons!” FAQ w Dave!