Stop buying Rolling Rock! It's made in Jersey! 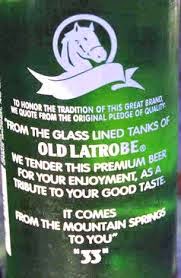 (1,308 words)
He was a nice earnest young man, very polite and friendly. Exactly the kind of person no one should want to murder.

But that was my instinct for reasons that will be clear to anyone who cares about things like truth and tradition.

He was drinking a Rolling Rock. Bragging about it.

We were making idle chatter at the Pour House, an outstanding Irish pub in Carnegie, birthplace of Pittsburgh Pirate great Honus Wagner, when he asked where I lived.

I told him Latrobe.

“Man, I’ve always wanted to go there and tour the brewery,” he said. “Rolling Rock’s the best. One day I want to come see where it’s made.”

“Then you’d better plug Newark into your GPS,” I said, “because that’s where they’ve been making it since 2006.”

I really shouldn’t have been mad at him. How was he to know?

Ever since 2006 when Anheuser-Busch bought the Rolling Rock brand, the beer producers have been successfully hoodwinking beer drinkers into thinking the beer was still made in the “glass-lined tanks of ol’ Latrobe,” a phrase that still appears on the charming green bottles.

See, I’ve loved Rolling Rock longer than I’ve loved my family. It’s been there for me since I started drinking beer back in, I think, the 5th grade.

And unlike those in my family, Rolling Rock’s never done anything to break my heart.

Of course, my family’s never done anything to give me a skull-pounding hangover so I guess it’s a wash in regards to which entity’s been more debilitating.

But I had a real fondness for Rolling Rock all my drinking life. I drank in college because we loved the taste and because the little 7-oz. pony bottles — we called ‘em grenades — were the perfect size to heave empty at the trains that ran right through the Ohio University campus in Athens.

It’s the beer they drank in the little western Pennsylvania neighborhood bars where they filmed “The Deer Hunter.”

I drank it with apostolic pride when I lived in Nashville. Heck, we all did. I have pictures of my going away party where the tables were littered with empty horses.

The horse was the 12 ouncer; the ponies were 7. It all tied into the equine theme painted in white on the green bottles. When they came out with a dark beer in about 1996, my buddy started calling it “horse manure.”

Everything about it was charming. It was small town. It had great mystique. It had that “33” on the label.

Some theorized that was the year a horse named Rolling Rock won the Kentucky Derby (false); others said it was because 1933 was the year Prohibition was repealed (true, but merely coincidental).

The real reason was because when the beer was first being bottled the owners put the iconic little “from the glass-lined tanks of ol’ Latrobe” phrase on the backs of the mock-up. The saying was 33 words long (true) and they put that at the bottom — “33” — so the printer would know how much per-word to charge.

I remember telling that story in college at parties and then watching the trivia spread. I could tell it was spreading, too, because you could see all the lips moving as disbelievers began counting the words.

It was college, but none of the Bobcats had yet learned how to count in their heads without moving their lips.

Then in 1989, fate could no longer be denied and I moved to Latrobe.

I’d found me a home. I was one of two bureau reporters right in Latrobe, just down the street from Latrobe Brewing. It was right there. You could see it. You could smell it.

I remember one time back when I was still doing local reporting and was responsible for getting the daily hospital admittance reports at Latrobe Hospital.

And you wonder why I left to do “Town Saved By Giant Ball of Twine!” stories for National Enquirer?

I remember one fall morning walking out of the hospital with my lists and being greeted by this young family that was from out of town and unfamiliar with the local aroma. It smelled like cooking cereal.

“Yuck! What is that smell?” they asked.

As we were standing outside the hospital, I was tempted to say something like, “Oh, this is when they burn the amputated limbs and other medical wastes!” Instead, I told the truth.

“That’s the brewery where they make Rolling Rock.”

I’ll never forget the beatific transformation of their faces. The smell went from noxious to marvelous.

The brewery seized on the small town charm of its brand and sponsored The Rolling Rock Town Fair at the Westmoreland County Fairgrounds in the early 2000s. Performers included the Red Hot Chili Peppers, Outkast, Nickelback, Stone Temple Pilots and a bunch of other bands that held zero appeal for me.

But I went because it was all just so cool. It was a true town fair. They had games, rides, cow-milking contests, the works. People came from all over the country and it was very special.

Budweiser bought the brand and moved it out to Newark. It was the last time I ever paid for a Budweiser product.

The brewery went idle and 70 of my buddies were out of work from jobs they’d expected would sustain them, as it had their fathers, through to retirement.

Some in Latrobe turned to prayer.

Me, I turned to Yuengling, a fine Pennsylvania beer brewed in Pottsville.

A series of owners came and went. Iron City, another iconic western Pennsylvania brand, was mismanaged out of business in Pittsburgh. They began making that in Latrobe.

And through it all the New Jersey producers of Rolling Rock kept up the charade that the beer was made in the town they’d turned their back on.

And I can’t keep up with what is made here. The brewery is booming.

They’re doing great, as is Four Seasons Brewery, a craft beer that began operating in Latrobe last fall and is going gangbusters.

But I miss the days when the beer world made perfect sense, when Latrobe made Rolling Rock, when Pittsburgh made Iron City and Newark made embarrassing mistakes involving sensible city governance.

The utter absurdity of it all was hammered home last month when we were in the Outer Banks on vacation. Val made a beer run and called from the store to see what I wanted.

“Oh, get the Red Stripe. I haven’t had that since our cruise.”

Remember those Red Stripe ads? You had this ya-mon Rastafarian extolling the joys of the Jamaican-brewed beer by shouting, "Hooray beer!" It reminds me of our Caribbean cruise and seemed perfect for vacation, a little island beer on our little island getaway.

It wasn’t till she brought it home and I studied the label that I realized just how out of tilt the beer world’s become.

My Jamaican beer is brewed now brewed in, ya mon, Latrobe.

There are still days when I’d like to get my hands on a Rolling Rock pony bottle.

It’s just that now I want to heave it at the train before any one else gets a chance to buy it and help perpetuate a fraud.

Email ThisBlogThis!Share to TwitterShare to FacebookShare to Pinterest
Labels: Boycott Rolling Rock, drinking in Athens Ohio, Latrobe products, what does Rolling Rock 33 mean, where is Rolling Rock made