Welcome Steelers & fans back to Latrobe! 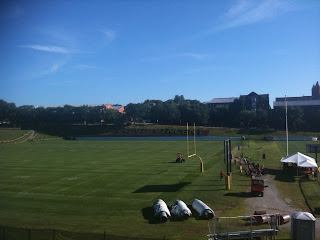 I was there yesterday morning to waiting for them.

My car was getting worked on at a nearby tire shop. It was such a magnificent day I figured I’d stroll about a mile to the campus library and write while the tire guys figured out fresh ways to soak an innocent like me.

They did. It was $386.30 for new ball bearing joints and what I think George Costanza referred to as “Johnson rods.”

Too bad the Steelers all arrived after I left. I was eager to introduce myself to any arriving players and tell them what to expect.

I’d planned on telling them they’re about to see a lot of corn.

Watching corn grow excites me. If it wasn’t for the change of seasons I’m convinced our Pennsylvania corn could grow clear to cloud-tickling heights.

As they’ll be studying playbooks, I doubt I could coax any rookies to spend a day with me in one of our lush corn fields just sharing our mutual amazement at how rapidly corn grows. And it might disqualify any would-be Steelers if coach Mike Tomlin were to learn any of them spent some time contemplating unusual vegetable growth spurts.

Especially considering how many of these very same athletes are known for unusual growth spurts of their very own.

The next three weeks are a great time to be in Latrobe. It’s when Steelers, both superstars and wannabes, become our neighbors. We’ll see them at the ATMs, at the gas pumps, at the bars and restaurants.

Just last year I was pushing my shopping cart down the chip aisle at the local Giant Eagle when I nearly ran right into 6-foot-4, 300-pound defensive end Ziggy Hood. I remember thinking, gee, he doesn’t look anything like the tiny, philosophical Ziggy I enjoy from the funny pages.

But I recovered quickly, said a bright “Go Steelers!” and stepped around him the way I remember seeing Ray Rice do when the Baltimore Ravens stomped the Steelers last year.

That would be a dream encounter for many fans. Everyone wants a one-on-one with Hood, Ben Roethlisberger, Heath Miller or -- my favorite -- Troy Polamalu.

I wasn’t there for it when a cheer went up when Polamalu and his family walked into Sharky’s, a popular Route 30 sports bar. The commotion caused him to summon the manager. Was he going to demand some diva privacy?

No. Instead, as the story goes, he told the manager he was going to pick up the check for everyone in the house That’s drinks and dinner for, oh, about 150, a lovely gesture.

I wish I’d have been there -- and not just because I’m a real cheap SOB.

No, I just love a good story.

That’s why I’m hoping one day this week some unheralded Steeler rookie strolls into The Pond looking for a real authentic local bar filled with real authentic Steeler fans.

He’ll be slight of build, someone the scouts dismissed. He’s maybe a war veteran. He’ll have left the family sawmill to take a chance on making the Steelers as a fleet-footed running back. He’ll say if he doesn’t make the team the business will fold and his baby brother will lose the prosthetic limbs he needs after the awful accident.

The slight, wheel-chair bound kid will be named Timmy.

Tiny Tim, you could say.

That man will make the team and lead the Steelers to their seventh Super Bowl victory. And each year he’ll return to The Pond to revisit old friends and buy us each new cars for our initial encouragement and for just being so darn cool.

He’ll marry a daughter of the one of the Joes, enjoy a Hall of Fame career, and all the Steeler fans will live happily ever after.

What, that story too sentimental for you? Well, what did you expect?

There were plenty of hints up top that this story was going to be real corny.