I speak: some laugh, some cheer, some snooze 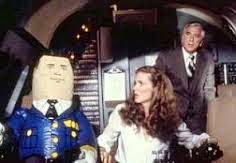 (1,062 words)
I don’t know whether it’s more flattering to me or insulting to those fully engaged in the craft, but lots of people who hear me speak say I should be a stand-up comic.

Me, have yet another discipline in which to spectacularly fail? Very funny.

I often tell aspiring humor writers it’s a mistake refer to themselves as humor writers. It sets the bar too high. People hear you’re a “humor writer” and they say, “Okay, funny guy, make me laugh . . .”

This is exactly the predicament of Marlin, the clown fish father-hero in “Finding Nemo.” And that fish wasn’t funny.

I do intend my talks to be funny. That’s why I fill them up with jokes, many of them so bad I often add a disclaimer so people will stop groaning long enough for me to get to the next big groaner.

It makes me think Roger Ebert would say about me what he said about the 1980 movie, “Airplane!”

So me and one of my all-time favorite movies are kindred sorts of souls.

For instance, I always include colorful living tip No. 396: “Open an art gallery with nothing on the walls. Then invite people to enter and be greeted by forty guys who say nothing but, ‘Hi, I’m Art!’”

The pained groans are so pervasive I’ve taken to hushing the crowd with, “Anyone who says puns are the lowest form of humor must have never seen an Adam Sandler movie!”

It’s my idea of being what the hipsters call “edgy.”

While humor may be the biggest part of my talks, it’s far from the only one. I also strive to be thoughtful, poignant, engaging, inspirational and maudlin even (I at one point ask the audience to recall the pain of losing a beloved old dog).

I tell you, I use every one of them damned crayons!

But for the last two months at every one of my addresses — whether it’s been before two dozen Pittsburgh Rotarians or 250 WVU Mountaineers — someone always comes up at the end and says I should be a stand-up comic or a contestant on one of the reality talent shows.

I am flattered. It tells me I’m onto something.

Plus, it’s a psychic balm for whenever I gaze out in the audience and see someone is sound asleep, something else that happens nearly every time I’m talking behind a podium.

It happened again Tuesday when one of the 100 teachers and staff I was addressing at the South Side Area School District in Hookstown, Pa., appeared to go into REM sleep the instant I began talking into the microphone.

It doesn’t upset me in the least. In fact, I’m such a nap advocate my instinct is to lower my voice to a whisper and ask everyone who’s still awake to follow me out into the hall where I’ll continue.

Of course, my other instinct is ask the band director to go fetch some orchestral cymbals.

Banging massive cymbals inches from the ears of a sleeping teacher would be mean, but it would also be funny. Well, funny to everyone but the sleepy teacher.

Hookstown is about two hours from Latrobe so I spent the morning and the drive rehearsing in my mind what I was going to say. I’m trying to be more extemporaneous believing that’s what people want to see — a man (or woman) talking without notes.

That’s the way it is anymore. To hold anyone’s attention you need to speak either without notes or without clothes.

But as happens anytime my mind is free to ramble, it began scheming on how I could take advantage of the talk before I’d even delivered it. It settled on an idea to have someone go up to the attendees after the talk with a video camera and ask, “So, in 20 seconds or less, what did you think of Chris?”

I predicted (ahem, correctly) that many of the comments would be favorable. I thought I could string them together and post it as another promotion. But then I thought that would look insufferably pretentious because I’d deliberately omit all the ones who said I sucked or “Get that camera out of my face!” which happened about six times.

Then I thought it’d be funny to ask my friends and family the same question and include little vignettes of friends saying I’m cheap, talk too much, aren’t as funny as I think I am, etc. Then I’d turn the kids loose so they could say I’m mean, ugly, boring, balding, “too farty,” at the dinner table, etc.

And I’m going to do just that. Feel free to get in touch, too, if you’d either like to say something either nice or snarky (Please, nothing too cruel; remember I have daughters for that).

What was interesting to me about the Hookstown address was that I was brought in to bat clean-up, to talk after a nationally prominent motivational speaker.

But the organizer chose me to keynote the thing, to make the last, best impression. He’d heard me speak at the WVU fracas you can read about in the “greatest author ovation ever” link below.

Motivator Miller is a really big deal and it was a genuine coup that he chose to attend this charming little district’s kick-off seminar.

The fact should alarm veteran speakers that a new kid’s on the block and they’d better up their game or get ready for a real ass kicking.

That the line-up was arbitrarily set because he happened to need to catch an early flight is a possibility my massive ego refuses to consider.

But the reaction was again very positive.

Even the teacher who’d slept through the whole thing applauded with enthusiasm.

Can I seize on this momentum?

That is the question.

That’s what I want to know.

Word Master! I’m the boss of the bee
Posted by Chris Rodell at 1:52 PM