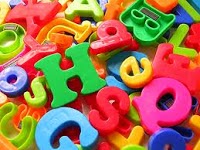 First day of school is tomorrow, as good a time as any to re-post my story about why the world would be better and more just if it were organized on alphabetically lines. Just like old home room!