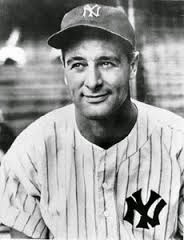 I think our next ice bucket challenge should be to take all that water and transport it to drought-stricken California.

I don’t know whether I should feel either lucky or just unpopular that nobody’s challenged me to dump a bucket of ice water on my head to help promote ALS awareness.

The origins and results of the Ice Bucket Challenge are truly wonderful.

I saw a tear-jerker piece about it on SportsCenter. The report said it started with 29-year-old Pete Frates, a former Boston College baseball player who was diagnosed several years ago with what is commonly known as Lou Gehrig’s Disease.

What’s uncommon is that Frates seems to have also shared many of Lou Gehrig’s Virtues, as well. And let’s talk about those for a moment.

Did you know he was the first player in baseball history to have his number (4) retired? And he was nicknamed “The Iron Horse” for playing in 2,130 consecutive games, a record that stood for 56 years until it was surpassed by the great Cal Ripken.

And he was beloved, a true gentleman during an era when that really meant something.

The last we saw of him was his retirement on April 30, 1939. I played the YouTube video of his iconic “Luckiest Man on the face of the Earth” speech for my 13-year-old who was wondering why no one had asked me to be part of the ice bucket fun.

I wanted her to know that there’s some real heart behind all the fun.

Frates, who is also beloved, will be lucky to make it that long. The savage muscular disorder has robbed him of the ability to speak, eat or move without assistance.

What struck me about the report was Frates saying when he learned he had the disease, he saw that basically nothing had changed about its treatment since the days of Gehrig.

This year the amount is more than $13 million.

So I’m hesitant to jump on the backlash bandwagon, while announcing I’ll politely decline any challenge to participate in this or in any of the copycat stunts surely brewing in the offices of other worthy charities.

And that’s what worries me.

Because this is just the beginning.

Every philanthropic organization in the country is right now scheming some fresh way to get you and I do something silly and embarrassing and post it on Facebook.

It’s going to be like we’ve time-traveled back to a time when we can expect Ralph Malph to insist we meet them down at Arnold’s because he and the “Happy Days” gang want to see how many people they can pack in Potsie’s VW to raise money for Tourette’s.

I’ll be pressured to get a mohawk for fibromyalgia or don a Speedo for SCARF Syndrome. Maybe someone’s going to ask me to stuff a squirrel down my pants to fight jock itch.

Of course, maybe I’m just being a typical downer, someone too cynical to realize all the joy and good these stunts are bringing to a world desperate for levity.

Maybe I’m just one of those guys who doesn’t need to do the ice bucket challenge to prove he’s all wet.