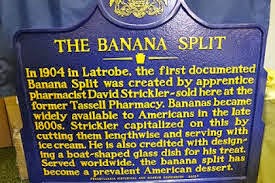 Still time to dash to Latrobe to enjoy the 2nd annual Great Banana Split Festival, the highlight of last year being the robbery of a local bank. I thought I'd repost this today because they still haven't nabbed the culprit and I pine for a closure that would involve a chase and the felon slipping on a banana peel.

The King of the Bank Robbers  . . . This was the 2005 story about America’s most prolific bank robber, Carl Gugasian. True crime fans will enjoy this one.
Posted by Chris Rodell at 2:26 PM