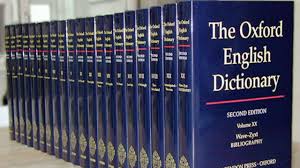 I was 50 years old before I learned I was born the same year as the word “dipshit.”

It was like the world in 1963 took one long look at me and said, “Nope, moron, idiot and imbecile are insufficient. We need something truly loathsome yet oddly whimsical to describe this one. How about … dipshit!”

I guess I’m glad my folks named me Christopher.

I began sleuthing word birthdays about 15 years ago when I began a quest to coin a new word in the venerable Oxford English Dictionary, the first and last word on words.

I figured my shot at linguistic immortality would be easier if it involved writing one really memorable word instead of one entire book with upwards of 75,000 previously used words.

At the time I was paying $295 a year for computer access to the OED and its 730,000 — and counting! — words. By comparison, your standard old school door stop dictionary contains about 140,000. These are formidable numbers, especially when you consider the average American uses just 20,000 words.

Why would anyone pay $295-a-year for access to something so redundant and unnecessary?

For me, it was the word birthdays. OED notes the exact year words became words. I learned, for instance, that the word computer is 400 years old. Yes, before they became essential, computers were people capable of computing.

And, of course, I looked up all my favorite swear words.

I for many years compiled a list of words when they turned 50. I got away from it for two reasons. One, I was irrationally insulted to learn the OED linked my birthday to a word as coarse as dipshit:  “n. A stupid, inept, or contemptible person; an idiot.”

It was like paying for a hooker and having her joke about your genitals.

Plus I learned you didn’t need to pay OED $295 a year if you had one valid library card. I at the time had four.

I know what you’re thinking …

• airhead — I prefer airheads to cementheads, but believe density is winning.

• Amtrak — If I had my way, I’d take an annual family trip on the train. Just love it.

• Archie Bunker — “A man whose background, outlook, and behaviour are likened to those of the television character Archie Bunker, esp. a blue-collar worker having (and vehemently expressing) views considered ignorant or bigoted.”

• B and D — Bondage and Discipline. Never heard of it. Not into it

• Deadhead — Maybe my best line: “If fans of the band The Grateful Dead are called Deadheads, what does that make those of us who revere the book “Moby Dick?”

• double album — This one warms my heart. Getting a great double album — “Goodbye Yellow Brick Road,” “Exile on Main Street” — was to me like becoming a father before I became a father.

• fart-catcher —“n. A servile assistant or follower; a lackey, a hanger-on.” Oh, how I wish my situation allowed for me to introduce someone as my fart catcher.

• homophobe — I like what Morgan Freeman said: “It’s the wrong word. You’re not afraid of anything. You’re just an asshole.”

• Jive — Seeing the word always makes me think of “Airplane!” the uproarious 1980 flick where Barbara Billingsley translates the jive of two-black passengers.

• multiplex — I fear these will go away next.

• omnisexual — “Involving, relating to, or characterized by a desire to engage in sexual activity with everyone, or with all kinds of people; practising or tolerant of such activity. Also: sexual in all or many ways.” Sounds exhausting.

• recycle bin — In what is to me one of life’s great ironies, most recycling bins are non-recyclable.

spoiler — I thought this was much younger. Like 1992 when “The Crying Game” premiered.

• stoner — I love spending days with stoners right until you wake up the next morning and find them snoring on your couch.

• stun gun — I wonder if the first ads boasted these non-lethal weapons would eliminate street crime.

• weather woman — Ought to be a superhero.

Laughter on a day of screams

On a day when so many chose to scream, I spent the morning with a woman who couldn’t quit laughing.

As you can probably guess, I wouldn’t be sharing this story if I’d feel compelled to declare she laughed when I took my pants off.

She was my hair stylist.

I say that like my hair has the capacity to still be styled.

Those lustrous days are behind me, as is my bald spot. I used to be able to count on really great hair. My hair used to have my back. Now I have back hair

Now, it’s thinned on the front, top and back. Its betrayal is near complete.

I was in a good mood as I walked into the chain salon, something that always seems to snip what remains of my masculinity along with my stray hairs. I was raised to believe real men get their hair cuts from real men, preferably real Italian men, big boisterous storytellers who when they leaned in smelled like they’d been marinated in garlic Old Spice.

But out of convenience and in shame I roll the dice and go to one of the chain salons.

I said I was in a good mood and that’s true.

News was breaking that Georgia had made U.S. Senators out of a black preacher and a Jewish investigative news reporter.  I don’t know what these Dixie voters can do to surprise me next.

So I had a little spring in my step.

This was in contrast to four years ago when I was in a foul mood.

My side had lost.

I was downtrodden. Forlorn. Bereft. I vowed to take action. That meant get out the vote. Not just me. I’m talking getting my mother and father to vote, too, which wasn’t as easy as it sounds because Mom and Dad have been dead for years.

I wonder if Kylie would have laughed at that stupid joke. I suspect so. I imagine she finds things like AM radio farm futures reports funny.

I wasn’t even being funny. I was just there for a fast haircut and some light banter.

What I got was about 10-minutes with a human laugh track. It was pure joy.

People pay hundreds of dollars to top comedians in the hopes they’ll say things  to make them laugh. I contend there’s an untapped fortune to be made by people who can appear soulfully sincere laughing at the things we say.

The cut cost $14. I gave her a $20 and told her to keep the change. She was noticeably surprised. She must not get many $6 tips.

It was worth it. Being around someone that sunny made me very happy.

It fortified me for later in the day when I saw all those self-styled constitutional scholars tearing apart a place so sacred to democracy.

So much anger and destruction resulting in nothing.

I confess now that I spent an inordinate amount of time trying to divine a comical conclusion to this folly and failed.

So a story that at heart is about giggles ends up being no laughing matter.

And that’s a cryin’ shame.

Posted by Chris Rodell at 2:15 PM No comments: