When stinkbug constellations are stellar 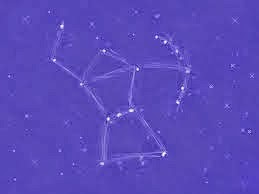 I know some of you may be checking into today to read my thoughts about the splendid “Arnie” show continuing tonight and tomorrow on Golf Channel. It’s been great, so far, but I believe in the next day or so I’ll be forced to address an egregious error on the otherwise meticulous show — and it involves me!

So if you came here today expecting Palmer, sorry. You’ll have to instead settle for stinkbugs.

(699 words)
A new unbidden pastime has crept on six legs into my life. You can partake of it for hours and all you need is a little imagination and a lot of stinkbugs.

For many, the latter exceeds the former in abundance.

So divining stinkbug ceiling constellations is a great way to kill time, that is if you’d rather kill time than stinkbugs

Killing them for me isn’t often an option because we have one of those high vaulted ceilings in the living room. I’d need to organize the family into one of those precarious human pyramids you see on “America’s Got Talent!” The crowd would roar if I could stick the landing after squashing the stinkbugs.

We don’t have a ladder that reaches that high and shooting them would ventilate the ceiling and only allow more stink bugs to pour in.

On most nights the ceiling is dotted with as many as a dozen stinkbugs.

So I’ve always got stinkbugs on my mind, not to mention sometimes in my hair, my glass and once one morning in my Lucky Charms. Yes, I nearly unwittingly discovered whether or not stinkbugs are magically delicious.

At night, I lay back in my recliner and see the dark brown stinkbugs clustering on the white ceiling and think, say, that trio looks like it’s about to form Orion’s Belt.

Then the insects will head in different directions and form what looks to me more like Orion’s Butt, a perfect constellation for bugs rightly described with the adjective stink.

Many of you may recall that I’d long been a conscientious objector in the Great Western Pennsylvania Stinkbug Wars.

While everyone else, my wife especially, was in a fury about killing them, I’d try and reason with them and give them little pep talks. I’d cradle them in a fresh tissue and simply toss them for the porch, thus restoring the natural order by turning insects back into what I like to call outsects.

To me, they were insect underdogs. They had to overcome a bad name and bad history with people who believed they were incapable of contributing anything to society that didn’t smell bad.

I guess I felt a sort of kinship. The link’s not as illogical as it sounds, especially when you consider my daughters call me StinkDad after nights when we’ve dined on Mexican fare.

But whereas I used to just take them outside and warn them for their own good not to return or else my wife might catch them and flush them down the toilet, I now kill them in droves.

And now there’s a sadistic element to the slayings.

When it was 2 degrees outside, and it still feels like that was just last Thursday, I’d fling them into the snow and watch them paralyze in the chill.

But when I was near the fire, I’d just toss them there and lean in to see if I could discern a stinky little scream. And, yeah, I’d flush them down the crapper.

And I’d wonder which was the worse death.

How would I like to go if the situation were reversed?

Being burned alive would be comparatively quick, but horrifically painful, a terrible way to to die.

I’ve been at Steeler games where it felt like I was on the verge of freezing to death. It was numbing and depressing, especially when the stinking New England Patriots were beating the Steelers in the 2005 AFC Championship game, the one in which they admitting cheating to win.

I have to say I think be the option I’d prefer if the situation were reversed. In fact, the flush resembles many of the marquee rides you find at the popular water parks.

Well, at least the first part.

Of course, it’s preposterous for me to equate myself, a refined and intelligent gent, with the lousy stinkbug.

Stinkbugs are a scourge. They destroy crops, infest homes and cause nuisance problems for people around the world. So they’d deserve killing even if they were as fragrant as roses.

But instead they stink.

At least not to anyone who’s outside of sniffing distance of me on Mexican night.

Stink bug anything but rosy