Our big bear's back again 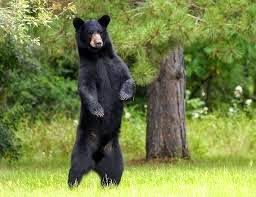 (764 words)
It’s a nerve-rattling event we’ve come to expect every year about this time. The little duel suet feeder hung up outside the big picture window begins to jingle on a windless night.

The bears are back.

We’ve lived up in the woods for seven years now and we see a bear or two — sometimes a whole family — about once or twice every year. It never fails to excite.

This time was so exciting I nearly crapped in my jammies.

There’ve been times when bears have nearly pulled down the gutter to get at the bird feed.

This was no ruckus. It was methodically efficient. It sounded like it sounds when I re-stock the feeder, which I do about once a month when the bears aren’t around.

That was disconcerting because it sounded perfectly dextrous, like maybe the bear had over the winter grown a pair of thumbs.

I ran to the kitchen and grabbed the flashlight. I pulled open the curtains and could see nothing. This is typical. The bear is black and so is the night and the flashlight usually just reflects off the smudged glass.

So in order to see the bear we needed to gingerly creep out onto the front porch and hope none of the baby bears were out there straining to reach the door bell.

We opened the storm door a crack. We were both being very careful: Val because she didn’t want our annoying little yip dog to run out and get annihilated by a hungry bear; me, because I was fearful my wife of 17 years was going to give me a good shove and lock the door behind me.

I turned the flashlight beam over to the left. There it was.

I’ve used the analogy before, but it looked like someone had parked a black Volkswagen Beetle two feet from our front window.

I understand the human tendency to exaggerate in these situations, but I’ve been to Steeler training camp many, many times and seen lineman whose weights are listed at 350. This was bigger.

And it seemed to better mannered than the often unruly Hampton. I mean, I’ve never seen a bear get flagged for unsportsmanlike conduct.

And I’ve never seen a bear do what happened next. It strolled about 20 feet away and lay down broadside to his audience.

It was laying down on its side on one elbow and daintily eating the suet square like it was a PB&J sandwich.

I’m sure to another bear it would have been sort of sexy.

I zeroed the flashlight beam on the nearby animal’s crotch.

Val asked what I was doing.

“I’m trying to discern its genitalia.”

I’m glad she didn’t ask why because the answer would have probably sounded stupid.

But I really wanted to know if this was a boy or a girl bear. I guess I’ve always been fascinated by bear genitalia ever since I read years ago that expert zoologists at the National Zoo had been baffled why two giant pandas had for months failed to mate.

Then they realized they were both males.

How embarrassing — and not just for the zoo. Just imagine how awkward the situation’d been for the pandas.

Boy Panda No. 1: “I can’t explain it, but all this togetherness is leading to strange longings. Admit it, Steve. You’re feeling the same thing, aren’t you?”

I couldn’t tell with our bear either and a more intimate examination was out of the question.

After a minute or two, the bear finished the last morsel, and on all fours sauntered off into the woods out back.

So it’ll be a while before we put any bird feed back in any of the bird feeders.

I do not wish to turn our front yard into some kind of omnivore’s petting zoo, especially after recalling how our littlest one when she was 4 asked, “Do you think the bear would let me pet it if I gave it a cookie?”

No, when it comes to getting any food from The Rodells, the neighborhood bears are all out of luck.

I’d say they’re screwed, but it seems wise for me at this point to leave it up to the bears to determine among themselves who’s doing any screwing.

Our big bear is back again

Email ThisBlogThis!Share to TwitterShare to FacebookShare to Pinterest
Labels: bear penis, bears and bird feeders, children and bears, Latrobe bears, Steeler Casey Hampton, what to do with a bear in your yard