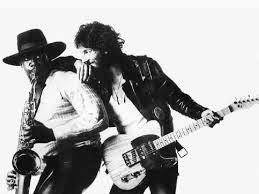 (906 words)
I wrote last week about how Bruce Springsteen flies a private jet home after gigs so precious can sleep on his own pillow. Tramps like, him, baby were born to skip long TSA security checkpoints.

I don’t begrudge him his imperial trappings, but I’m sure even he is self-deprecating enough to know indulging them sets him up for snark attacks from jealous guys like me

I’m writing this from the road. Three cities in 18 hours. Last night was Butler, breakfast in Holidaysburg and after I bang this one home I’m bound for Altoona.

Like Bob Seger, I’m singing about turning the page.

Only with me, the page I’m turning is within the vivid covers of “Use All The Crayons! The Colorful Guide to Simple Human Happiness.”

And with me there’s not a groupie in sight.

It’s nothing but Rotarians!

I bet it’s some kind of coincidental record, but I’m maybe the only author in the world to be invited to speak to three different Rotary Groups within a 150-mile radius all in less than 24 hours.

There was a time not too long ago when I used to be afraid of Rotarians. They were so proper. So dignified. So, so, so . . .

Now, I’m spending so much happy time with them I’m thinking I might become one through authorial osmosis.

It’s been wonderful, too. See, it’s taken me a long time to hit my stride in finding out how best to sell my book.

I’m becoming a firm believer the best way for me at least to sell my books is to show up with a smile and meet readers in the churches, the civic halls and libraries and begin to speak in a clear voice about the things about which I’m passionate.

That means, I guess, spending my every free moment from the past 32 years in dark taverns in the hopes I’d find success was maybe a slight miscalculation.

In the last 24 hours I’ll have sold about 25 books (pending lunch session estimated), eaten three free meals and been bestowed with blessings and commemoratory Rotary tchotchke (Hollidaysburg gets points for originality; they gave me a Rotary slinky!).

I could live on that.

Lunch will be my sixth Rotary presentation in the past four weeks. I’d previously done Latrobe, Greensburg (my best; sold 24 books!) and Washington. Upcoming are Uniontown and Somerset.

The great thing about these visits is how they are really sharpening my stump speech.

For instance, this morning may have been the best one yet. The crowd of about 24 was very enthused. They laughed at all my jokes, nodded at the poignancies and gave me one of the most warm receptions I’ve ever had.

I sold seven books, including one before-my-eyes download and two requests for contact info from people who want me to mail them books.

Some may sniff at the sale totals.

That’s really just gravy — and I’m not talking about the kind slathered on the Salisbury steaks!

No, for me the best result is each time becoming more adept, more polished and more confident about my public speaking.

That’s where the money is. I’m aggressively pitching more businesses and groups about having me come in to share my motivational humor.

The pieces seem to be falling into place.

One problem: unlike Springsteen my setlist never varies. I’m giving the same talk over and over. I don’t think anyone cares. It’s not like I’m married to anyone in the audience and they’ve had to hear the same tired jokes for, geez, 22 years.

One other problem: I give the exact same speech no matter if my time allotment is 15 minutes, 30 or an hour.

I just vary the pace of my spoken words.

The 30-minute talk is the most natural and least challenging for the audience.

It’s the only speech that comes with several thousand built-in intermissions.
So that needs work.

But I’m really just getting started.

That’s enough for now. Like Willie Nelson, I’m on the road again. I’m bound for Altoona and optimistic it’ll all go well and my Rotary audience will be on fire to buy my book.

No private jet for me, though.

Note: I’d intended to file this before the Altoona presentation, but ran out of time. So here’s what happened:

It was in a ballroom in the Blair County Convention Center, before about 75 Altoona Rotarians, the largest crowd I’ve ever addressed. It went great. Sold 29 books and came within six books of selling out.

Afterwards, the organizer called me on the way home and said it was one of the best presentations they’ve ever had. “Everyone loved it!” he said. “It was informative, entertaining and it was short!”

I’m off the clock now so you’ll have to make your own jokes there.

It was all very gratifying. In fact, it went so well on the way home I began thinking, “Hmmm, maybe it’s time I thought about starting a cult. I hear there’s good money in that.”

I’ll let you know if anything comes of that logistical brainstorm.

Results of my weekend crash: my computer/my Saturn

Email ThisBlogThis!Share to TwitterShare to FacebookShare to Pinterest
Labels: Chris Rodell speaking to Rotarians, how to excel at public speaking, Springsteen's private jet, Use All The Crayons, Willie Nelson getting high