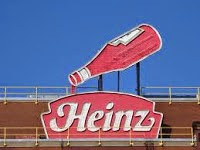 So how do I pick which stories to showcase on Sundays? Usually, it’s when the stats page shows me that some old post has been organically drawing a audience all on its own. It often happens for no apparent reason. Like why would anyone on earth pick up on this story about the speed of ketchup from Oct. 2011? It makes no sense. But more than 50 people latched onto this story this week and started sharing it with friends.

I can’t explain it. All I can do is run it up the flagpole once again and hope others will salute.

Tune in tomorrow when I’ll be writing about my worst book signing ever. It was yesterday!

(585 words)
So I had this news clip on my desk for about the last three months. I’d pick it up and look at it again and again. It seemed too trivial to indulge with a full post, yet too fascinating to dispense with a tweet.

But I can’t shake its import. I must share.