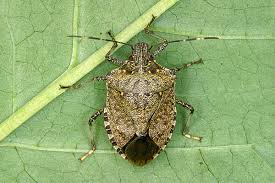 (751 words)
I was pleased to see my daughters have inherited my lifelong passion for star-gazing. This became apparent when Josie peered skyward and said, “It looks like the Big Dipper. There’s the handle and there’s the ladle.”

She was right. It looked just so.

Then about five minutes later she said, “Now it’s starting to look like the Tin Man from ‘The Wizard of Oz.’"

The constellation had, indeed, shifted. See, these weren’t stars.

They were stink bugs.

The stink bug population in our living room is sufficient at any given moment to turn our ceiling into a sort of stink bug planetarium.

I was once so charmed by the stink bug that I’ve written multiple times about how it was unfair to even call them by such a blatantly prejudicial name. A friend of mine noticed and introduced me to his son as “the man who loves stink bugs.”

While that I thought went a little far, I did not shrink from the introduction. Instead, I gave a thoughtful little speech about how I believe all God’s creatures deserve a fair shake and concluded by asking the young man to consider joining me in PETSB -- “People for the Ethical Treatment of Stink Bugs.”

He declined and today the next person to join me in PETSB will double its membership.

That was last year.

This year we are inundated with stink bugs and it is trying my stink bug ethics.
I’ve still yet to kill a single stink bug, but am becoming fearful that not killing them might wind up killing me.

I’m becoming hyper-aware of their activities and find it impossible to relax in even  my own living room. I used to just leisurely scoop them up and toss them out the door. Now I manically spring into action anytime I see one buzzing about the light, crawling up the curtain or sunbathing on the window.

And stink bugs are champion sunbathers. I don’t know if they use Coppertone or what, but their tan exoskeletons are the envy of people like that wacky New Jersey tanning mom.

Now I’m even resorting to holding the little hand-held mini-vac in my lap so I can spring into action whenever I see one or two of them getting together to, I don’t know, maybe instigate some stink bug mischief.

I’m like a big game hunter on safari. I’m thinking of constructing a holster for my mini-vac so I can practice my quick draw.

There’s just so many of them.

It is said the average female stink bug is capable of laying 200 eggs each year, a number I dispute based on the fact I’ve never seen a single baby stink bug. Nor one that looked like a decrepit old timer.

No, the stink bug comes in one size and, and I know how discriminatory this will sound, but they all look exactly alike.

The fact must make the task of keeping underage stink bugs out of stink bug night clubs difficult for stink bug bouncers.

Worse, this uniformity of appearance hinders my plan to introduce birth control to the 17 mm stink bugs, a plan already fraught with pitfalls given the microscopic reproductive organs of those involved.

And, please, I’m talking about the stink bugs. Not me.

I’ve seen two stink bugs doing what looked like screwing, but I primly turned away before I could draw any conclusions. I know my performance suffers anytime the stupid dog jumps into bed and stares and tilts his head at funny angles whenever he busts Val and I getting busy.

My plan is to take a tiny cotton swab bathed in crazy glue and just give each captive stink bug a gentle touch to their armor underbelly where I have a ballpark guess where the stink bug private parts might be.

I remember reading some offbeat news stories of angry wives and girlfriends who did something similar with human private parts of straying males and it seemed to do the trick -- at least for that day’s news cycle.

I’m still not to the point where I want to kill all the stink bugs. And even if I did I know by now it would take a flame thrower and the collateral damage would be considerable.

Yes, the stink bug is an increasingly troubling nuisance, but I’ll not succumb to senseless violence.

I’m still a guy who doesn’t want to hurt a flea.

But that doesn’t mean I won’t sterilize a stink bug.