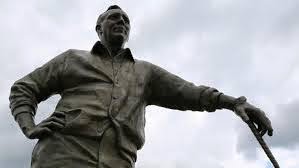 (692 words)
I wonder if Arnold Palmer’s as nervous about the three-night bio-extravaganza devoted to his life as I am about possibly appearing for maybe 20 seconds in the Golf Channel program.

Some of you may will recall my August stories when I wrote the network was in Latrobe to film Palmer stories.

I mistakenly thought it would be cheesy filler for around Palmer’s September 10th birthday when he turned 84.

The producer told me they’d be jetting around the world for the next six months interviewing global dignitaries about their Palmer recollections.

But they were starting at The Pond.

So that was very cool.

Due to my associations with both Palmer and The Pond, I was to act as a sort of emcee. I’d make a few introductions and conduct on-camera interviews about what Palmer meant to Latrobe.

So it was a really great night. They filmed for about five hours, we all had a lot of laughs and we all got a little drunk for free on the Golf Channel’s generous tab.

It worked out even better for me.

They gave me a Golf Channel ball cap!

Palmer, incidentally, is a founder of Golf Channel and is apparently casual about obvious conflicts of interest. So it’s safe to assume those expecting some kind of hard-hitting exposé about Palmer never fixing his divots will have to look elsewhere.

But as the Sunday post-Masters debut approaches I find myself grappling with an odd sensation in my stomach. It is full of butterflies.

This would be disconcerting for anyone, but for me especially because my stomach is wondering why it is full of butterflies instead of beer.

See, no one’s ever told me there’s a chance I’d ever be on national TV doing anything. It’s likely to be the most-watched program in the channel’s history.

And, guaranteed, everyone I know who golfs is going to be glued to the set. That’s a lot of people.

Golf and the social interactions to which it inevitably leads has been a big, joyful part of my life.

What if they use the dialogue where I reveal how being such close associates with Palmer has been one of the best parts of my career? Or about the times Palmer’s bestowed fatherly advice, or the warm bond we’ve forged over these past 10 years.

So an old friend might be watching and say, “Hey, hon, remember that Rodell kid  from the ‘80s I used to golf with and then go straight to the bar? He’s still in there.”

Editors at prestigious golf magazines with whom I once worked might be watching and say, “Well, he may have been BSing about his ability to write a coherent sentence on deadline, but I guess Rodell wasn’t lying when he said he knew Arnold Palmer.”

Arnold Palmer might be watching and say, “Who the hell is Chris Rodell?”

We’ve heard the producers shot over 3,000 hours of film. They were in The Pond filming for about five of those hours. Of that time, I was probably filmed for about 40 minutes.

So the odds of me being on for even a little bit are really pretty slim.

But — who knows? — maybe I dazzled. Maybe they’ll devote an entire episode to my insights.

Maybe a publishing house will contact me with an offer of $100,000 to write the definitive Palmer biography.

Maybe some Hollywood producer will say, “By God, let’s get this dashing Rodell character to play Palmer in the biopic!”

Of course, I’m getting way ahead of myself.

I’ll be happy if even a few moments of my talk air.

And nothing will please me more than if the show features my good friends, Dick and Dave Carfang, and their great bar that’s been another Latrobe icon since 1954, almost before Palmer was old enough to legally drink.

See, I figure nothing that airs on the Golf Channel homage will change the fact that I’m already coming out ahead.

Because nothing they can say or do now will make me give them back their hat.

Arnold and Elvis: cool things raining down on me