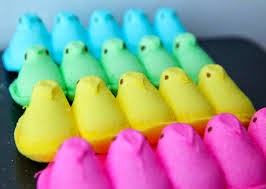 (955 words)
• I checked and unless I’m mistaken it’ll be one year exactly Thursday since I’ve done one of these lazy blog round-ups. That’s where I can’t think of a single central idea strong enough to carry me through 750 or so words so I just riff on a bunch of stories. Why I’m reluctant to do more I don’t know. The numbers go up when I post one and people tell me they’re a nice, breezy read. But it always feels like cheating to me. And what’s the point of maintaining a four-to-five day a week blog that doesn’t pay squat if you can’t do everything in your power to make it a real pain in the ass?
• Did you have a great Easter? I hope so. We did. Val, our church organist, played both morning services, so it was a typically hectic Sunday, but she plays so well I think the services aren’t the same when she’s not there. Of course, I’m never there when she’s not so how the hell would I know?
• We’d picked up my Mom the day before so she was home with us all morning doing her crossword puzzles. We encourage these because the experts say the mental activity helps stave off dementia. Whether this is true or not, I do not know, but I do know that I’ll never see another four-letter word for marshmallow Easter treat without thinking of this Easter. Because every time I walked into the room she’d say, “What’s a four-letter word for marshmallow Easter treat?” It must have happened six times. So once again an activity intended to be beneficial to her mental health becomes detrimental to mine.
• I was kidding about blogging being a real pain in the ass. I love writing the blog, but I do know some readers hold me to a very high standard and I feel compelled to try and live up to those expectations. Thank you for that. And that I do mean.
• I was leaning towards writing about the Portland vandal who peed in the reservoir and caused authorities to flush the entire 38 million gallon contents. Some say they’re being prudent; some say wasteful. Me, I have a bunch of questions: Like exactly how big was this guy’s bladder? And did tests reveal there was something particularly hazardous about his urine? Did it contain some alien extract that if anyone took even one sip it would make them pregnant — even the fellas! — with flesh-devouring extra-terrestrials who were sure to destroy humanity? Of course, that’s unlikely so it seems like a huge waste. I imagine the contents of a single glass of water after the scoundrel peed in the reservoir was something like one part urine per about 988 million parts ordinary water. I’d drink that. Heck, it sounds like the same proportion of ingredients in Miller Lite Beer and people pay good money for that stuff.
• My buddy came up with face value tickets for me to take Josie to her first hockey game Saturday. We went to Pizza Milano before the game and the place was so packed they made us sit at a four-top table with two total strangers. Josie was horrified. We’d have to make conversation with people we didn’t know! But the guys couldn’t have been nicer. They were beer-drinking Penguin fans. I’m not saying I thought about ditching my daughter for their company, but it was nice to be reminded there’s always friendly options in case someone gets surly.
• Many of you might be wondering how can I afford two playoff tickets to a Penguins game when I’m always so broke. Well, I’ve booked a lot of speaking engagements for the next few months and am anticipating that income avenue is about to blossom. And Josie said she really wanted to see a game. I love hockey and, man, I really love Josie. My buddy was kind enough to kick us some tickets at face value. I figure in 10 years Josie’s not going to remember me staying up at night worrying about money, but in 10 years she is going to remember the night Daddy took her to her first Penguin game.
• And, yeah, a friend of mine talked me into going to the Springsteen concert with him on Tuesday. Now, that’s extravagant. I guess you can consider me buying tickets for that show a sign of my confidence in the future. But even if things don’t work out the way I hope I’ll still have gotten to see Springsteen and that’s an eminently fair trade.
• If it makes you feel any better, I’ve yet to splurge on single a round of golf this year. Responsibility rocks!
• For a guy who’s become famous singing, “Born to Run” I’ll bet Bruce Springsteen doesn’t even own a single pair or track shoes.
• Oh, and I have two spare tickets for the Tuesday show. They’re section 226. That’s behind the stage, but they’re in the balcony row A. They’re face value $68 each, but I’ll welcome the eruption of an insane bidding war.
• Nothing detonates my diet like having a spiral cut ham in the frig. It’s delicious. It’s there. Every time I walk past I pull open the door and tear off a fistful and shove it into my mouth. Yes, whenever there’s good ham around I just can’t help but make a pig out of myself.
• I’m a writer. I write. I know bankers who bank and bakers who bake. I’m familiar with miners who mine and cooks who cook. But can anyone tell me what exactly an usher does?
• Oh! One last thing: Anyone know a four-letter word for a marshmallow Easter treat?

Email ThisBlogThis!Share to TwitterShare to FacebookShare to Pinterest
Labels: how much pee in water, mom has dementia, peep phenomenon, Penguin playoff tickets, Springsteen tickets in Pittsburgh, what do ushers do