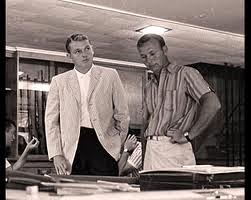 (1,489 words)
I knew when the phone started going off at about 10:52 p.m. last night I’d made the cut. Friends from around the country were calling to say they’d seen me near the very end of the second installment of the Golf Channel’s wonderful biopic on Arnold Palmer.

It concludes tonight at 10 p.m.

We’d DVRd it and were about 10 minutes behind. So it was very exciting.

Sure enough there I was. It started with a voice-over played above a shot of the custom table top at Palmer’s office where he’d embedded medals from each of his 95 professional victories. I’m saying how after each victory he’d always tell the craftsman to drill an extra hole, so sure he was he'd soon win again.

The film then cuts to me saying something like “and today there are still two vacant holes waiting for Palmer’s next victories, ones this 83-year-old man is confident may one day yet happen.”

The entire sequence lasted about two minutes, I’m sure, but the producers graciously edited out all the “ahs,” “ums,” “ers” and times I yelled “Cut!” while I paused to scratch something itchy.

I rewound it about three times to allow my vanity its due bask and then once more to check something that was important to me in terms of accuracy.

I wanted to make sure the tag line didn’t imply I worked for Arnold Palmer.

It did not. It said, “Chris Rodell, writer, Latrobe, Pa.”

See, there was talk about hiring me to be a curator regarding the Arnold Palmer legacy. I got all dressed up and met a group of about eight people in a secluded section of the dining room at the Latrobe Country Club to discuss the particulars.

Two of my good Latrobe friends I’ve known for 10 years were there (they’re long-time Palmer employees), as were about six people from Florida whom I’d never met.

The Sunshine Staters were running the show.

About 10 minutes into this meeting, I realized I was being offered an important job, one for which I was perfect. I’d interviewed Palmer more than 50 times and had put together the comprehensive day-by-day timeline that is central to www.ArnoldPalmer.com.

You’re going to think I’m making up what I’m about to tell you. I am not. And the facts are without embellishment.

I shared with them my ideas about why Palmer is a transcendent figure, and how his legacy should be promoted so it’ll forever endure. I spoke with evident insight and polish, so much so that the attorney who was running the meeting at one point put his pen down and looked up from his detailed notes and said, “I have to say your ideas are giving me chills. You’re a tremendous speaker. You should be a college professor.”

I was thinking how I didn’t know how this job interview could have possibly gone any better.

If my wife had been there, this is the point at which she’d have begun hyperventilating.

Me, I felt like my time had finally come. I was being offered a high profile job for which I was eminently qualified.

Then it got better again.

One of my old friends with the full attention of everyone pulled out a $100 bill and said, “And I want to buy five copies of your book.”

I say I was feeling confident, but at this point I did begin to feel a bit woozy like I was hallucinating. Never has a job interview with anyone gone so well.

The details of what followed remain burned in my brain.

The attorney asked how old my kids were for the purposes of the benefit package. I haven’t had benefits in 20 years.

I’d never even considered it before, but now I desperately wanted one.

“Now, I want you to take the weekend and talk this over with your wife and get back to me next week with an idea for a salary.”

He took off his glasses and said, “I’m not fainting. It’s not going to be easy, but I’ll see what I can do. I think we can justify it.”

What I didn’t say and what I thought was, “Man, throw in a couple free rounds of golf and I’ll settle for $20,000! You have no idea how difficult living without benefits and a salary has been for me and my wife.”

He told me he’d get back to me in a week.

So we went to lunch where I was careful not to say much lest I blow it. Then we all departed with handshakes, hugs and goodbyes.

What did I do next?

I took that crisp $100 bill and drove right down to the local florist and spent a big chunk of it on a lovely arrangement. Val wouldn’t be home for an hour.

I kept the suit on. I’d for years been looking forward to a moment like this and I wanted to make a big impression.

When she got home, I gave her the bouquet and said, “Everything’s changed. I’ll have a salary, benefits and you and I are now part of one of the most prestigious corporate teams in the world.”

Her first words were, “I don’t believe you. This can’t be happening.”

I think she suspected the flowers and the good news were all a crafty ruse designed to snag me some quick cinch sex before the kids got home.

I think part of her still believes that’s what really happened.

Even if that sex hadn’t come to pass and — hallelujah — it did, I was destined for a really good screwing that day.

Because after almost two years I’ve yet to hear back personally from a single one of the Florida decision makers who’d dangled so much before someone so needy.

I was included in one mass e-mail announcing a vague eagerness to move forward, but not one call. Not one update. All my many follow-up letters, both electronic and snail mail, have gone unanswered, all my calls unreturned.

Not a single professional courtesy has ever once been extended.

Understand, this isn’t some faceless corporation. This is Arnold Palmer Enterprises. Palmer famously built his vast empire on a handshake deal with super agent Mark McCormack and I had a handshake agreement with a room full of people representing the man forever known as The King for how he treats everyone.

This is behavior barely worthy of weasels.

And let’s pause for a second to consider how low you’ve sunk when you’re getting business etiquette lessons  . . . from me!

I’ve for 22 years been a freelance writer. I’ve lost count of the times people stiffed me for pay, reneged on expense accounts and stopped returning my calls when they’ve owed me thousands of dollars. Pound puppies get treated better.

And the very worst treatment I’ve ever endured is at the hands of people who have an obligation to live up to the standards of a man adored and admired around the world?

So we persevere and remain ever cheerful in the face of every adversity, certain that one day something really good is going to happen regarding my career.

It’s something I’ve said each and every day since 1992.

Some of you might wonder about the wisdom of so publicly criticizing the business ethics of a conglomerate with whom I still work, that I might in essence be biting the hand that feeds me.

I think it’s because the hand’s been too otherwise occupied showing me its extended middle finger.

Interviewing Arnold Palmer
Posted by Chris Rodell at 9:01 AM

Thanks for sharing something so personal. Do you think if Arnie understood this has transpired in his name that he might otherwise influence this callous injustice?

You need to do more to monetize your blog. You have readers. Make a buck off 'em. And that's a shame about AP's team giving you the shaft.

I'll welcome your suggestions on how to do more, John V. I did take the step of accepting ads through AdSense so we'll see how that goes. E-mail me at storyteller@chrisrodell.com if you wish.

And thanks, P.J.! I messaged you elsewhere.

Sorry to hear about this, Chris. You certainly deserve better - and frankly, so does any job applicant. The behavior of these executives was unprofessional and reprehensible. I feel like they dragged Arnie's name through the mud.
Good things are surely coming your way!

It's appalling, isn't it, Joe? I've heard from many friends who've experienced similar treatment. And I do persevere cheerfully. It helps knowing I've got guys like you in my corner. Please share the blog with friends whenever you find it worthy.