Who'll take on Trump & what Cher has to do with it 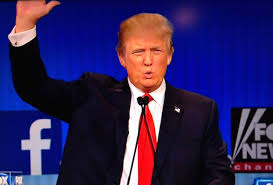 I first spoke to Donald Trump in the early 1990s. I remember word-for-word our entire conversation.
Trump: “This is Donald Trump calling for Wayne Castleman.”
Me: “Hold, please.”
I think we had that exact same conversation about four or five times over the next week. I remember thinking each time how ironic it was for me to be transferring a call from a man who lived in a castle (Mar-A-Lago) to a reporter named Castleman.
Watching Trump last night I tried to recall all the famous people to whom I’ve said, “Hold, please,” while transferring their calls to reporters more important than I.
This mostly took place in the early 1990s when I was working at National Enquirer in fabulous Lantana, Florida. I did most of my work from our Pennsylvania home but the Enquirer — best employers I ever had — would fly me to Florida for two weeks every six months or so.
I’d spend most of my day doing odd jobs, BSing with old English Fleet Streeters and manning what I came to call the “Hold, please” desk.
The B- and C-list personalities to whom I’ve said, “Hold, please,” makes for quite the oddball celebrity Hall of Fame.
Besides The Donald, there was Julie Newmar, Joey Buttafuoco, Pat Sajak, Loni Anderson, LaToya Jackson and, my favorite, Rob Camelleti. Bonus points if you remember Camelleti.
That’s right. He was superstar Cher’s bagel boy lover. They met and fell briefly in love when he was 22, she 40.
He was my favorite because every time I’d say, “Hold, please,” he’d say, “Sure, thanks, man.”
Trump was one of those celebs who complained constantly about having his private life exposed in The Enquirer, yet found exposing his private life in The Enquirer irresistible. He’d feed Castleman and other reporters his side of the story, often with the stipulation to say the info was from “sources close to Trump,” a typical celebrity dodge.
After watching last night’s debate, I detect the GOP establishment is nervous about being close to Trump.
I can’t blame them.
I used to think he was just a frivolous ass.
I was wrong.
He’s the most appalling and crass individual I’ve ever seen run for office.
He makes Ross Perot look like George Clooney.
He’s striking a chord with people who find his bracing brand of honesty refreshing.
These people fail to understand honesty without tact is like brain surgery without anesthesia: The operation might succeed, but the procedure can kill.
Trump says these perilous times require such stridency. He says that means Trump.
Wrong. We don’t need Trump.
We need Fred Rogers.
Or maybe Joe Welch.
Welch was chief counsel for the U.S. Army in the historic Army-McCarthy hearings that marked the downfall of U.S. Senator Joe McCarthy (R-Wisc.).
During a June 9, 1954, senate hearing, the thuggish McCarthy accused Welch’s trusted young assistant, Fred Fischer, of typical communist shenanigans.
Welch’s indignant reply on live TV is among my favorite moments in American history. He said:
“Until this moment, Senator, I think I have never really gauged your cruelty or your recklessness. I like to think I am a gentleman, but your forgiveness will have to come from someone other than me.”

When a sputtering McCarthy tried to renew his attack, Welch interrupted him:

The outraged civility of the rebuke signaled the long-overdue end of McCarthyism, one of the darkest periods in American history.

So someone in the GOP has a golden opportunity.

He or she can pick the right moment and deftly plunge the dagger into the heart of Trump’s corrosive ambitions. It will instantly elevate that candidate to the top of the polls.

It’s going to take someone firm, but well-mannered, someone who’s gone hand-to-hand with really tough customers.

Someone who knows how to get on a real roll.

I wonder if Cher’s erstwhile bagel maker is busy.