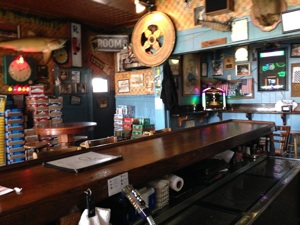 Breaking news: Jaffre’s is open again at the Tin Lizzy! This is great news. They’re open for lunch and dinner starting today (closed Sundays).
The three-bar, four-story building had been without an anchor restaurant for about two months, which means the only thing it’d been without longer was a resident writer.
And what respectable tavern can do without one of those?
Mike Jaffre and his family enjoy great reputations in the area. They’re friendly and present an outstanding menu of affordable upscale dining like Capellini Jaffre, a shrimp and scallop noodle dish served with brandy parmesan sauce.
This means the building’s premier entree will no longer be Spam.
Let me explain.
The main bar doesn’t open until 7 a.m., but I usually roll into the parking lot at about 6:15.
It takes keys to four locks to get to my third floor office.
For years, I needed just two keys to run my entire hobo life. Now, I have six. I feel like some kind of half-assed custodian.
So everyday when I walk into my office it’s like the opening sequence to “Get Smart!”
The red key opens the corner door to the Main Street bar. Then there’s a key to a padlocked door separating the bar from Jaffre’s dining room. The blue key opens the door to the hallway stairs that lead past Flapper’s, the second floor martini bar. Then there’s the green key that opens the warped door to my shabby little third floor office.
But the red key is, well, key.
That’s the one that gives me access to everything I’ll ever need the day Val and the kids say they’re fed up with my farts.
There’s a rockin’ jukebox, big screen TVs, kegged and bottled beer, four shelves of high-quality liquor, snacks and lots and lots of Spam.
Yes, I said Spam.
Ah, Spam. So exquisitely downscale savory. I could live for years on all that.
See, the thing about possessing the right key is it not only lets you in, it also gives you the doomsday option of locking everyone else out.
Andy Dufresne understood this in “The Shawshank Redemption” scene where he locked everyone out of the warden’s office and luxuriated himself and the entire prison in amplified opera.
It’s a beautiful moment that ends with angry guards kicking his ass, which is an even more beautiful moment for all of you who prefer old school law-and-order to Mozart’s “Marriage of Figaro.”
My option is more along the lines of an old Dallas Wayne country song: “Crack the Jack and Crank the Hank.
Hey, you can have your desert island fantasy and I have mine.
And that’s something I think about every day I pull that red key out of my pocket. I’m pleased Buck, the owner, trusts me enough to give me keys to the whole shebang, but morally deficient enough to realize that could one day backfire.
In some ways, it already has.
It’s why I contend Buck owes me eight cans of Spam.
The Tin Lizzy is a jackpot of quirk. On the one wall, there’s an ancient wheel of fortune (pictured above). Customers are allowed one free spin a day.
Its ratting sound is a constant backdrop.
It has 180 numbers. Five of them are marked for prizes. One gets you a free drink; one a drink for half-off; one’s an enigmatic free “card,” about which I know nothing; one’s a loser where the spinner has to buy the bartender and Buck a drink.
And one is for a free can of Spam.
I spin that wheel each and every morning while I’m on my way to Door No. 2.
And for eight days in a row my spin has against all odds landed bang on Spam.
At least that’s what I told Buck.
“Can you believe it?” I ask.
He can’t. He calls me a liar.
“Why would anyone lie just to obtain eight cans of Spam?”
He says he doesn’t know and invites me to have a drink while we explore the reasons.
He is my kind of philosopher.
So while my specious Spam haul is in being adjudicated, I’ll at least now have the option for some superb Capellini Jaffre.
I just hope Spam don’t spoil.

Related . . .
My new office!
I’m lovin’ cornhole! Who wants to join me?
Excessive traffic lights driving me to drink
Bird watching in Mr. Rogers’ Neighborhood
Zombies at The Pond


My history of drinking at/near work

How can you talk about Spam without mentioning Monty Python?