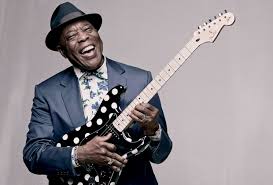 We're both innocuous, family-friendly and never resort to profanity.

So the key difference is that “Peanuts” earns millions while this blog earns peanuts.

The closest I get to "going blue" is when I remind people the only time bitch, bitch, bitch turns into something productive is when you’re running a thriving dog-grooming business.

What’s funny is while I rarely type a profanity, I spew them verbally near ‘round the clock.

I bring all this up because renown Pittsburgh blues promoter Ron Esser, owner of Moondog’s blues club, took it upon himself to scold blues great Buddy Guy for using swear words from the stage. It was a big local story.

Esser — and he is beloved in the ‘burgh — is a nationally-renown blues curator. I’ve been to his club numerous times and spent a great Fourth of July afternoon drinking and talking blues with him when he'd come to visit my good buddy Bill at his bar, B.C. Kenly's, in Latrobe.

So Esser knows the blues. In Pittsburgh, you could say he is the blues.

That’s why the idea of him scolding blues legend Buddy Guy has me saying, “What the, er, heck?”

I don’t want to run afoul of the FCC-based guidelines so memorably lanced by George Carlin in his “Seven Dirty Words” routine.