Catching up on the Ashley Madison scandal 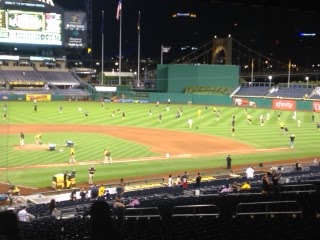 I want to preempt exposure on Ashley Madison hack lists by announcing my eagerness to cheat.
The randy initiative burst through just last night when I saw hundreds of men and women — kids, too! — doing it right there in the grass.
They were having a ball.
Actually, they had about 50 balls.
Shame-free orgy?
No, they were playing catch on the PNC Park outfield after the Bucs 4-1 win over the Arizona Diamondbacks.
They were doing the kind of shagging that would be a cruel disappoint to Austin Powers.
It looked like so much fun.
I’d never heard news of this splendid promotion. I didn’t know who these happy strangers were or how they got lucky enough to scramble out on the outfield of the most beautiful ballpark in America to toss the ball around.
Playing a game of catch is maybe the second most glorious things two consenting adults can one-on-one do together.
Care to guess what’s first?
I can’t get either Val or my daughters, ages 14 and 9, to play catch with me. So sign me up if there’s ever an Ashley Madison with the tag line: “Life’s short. Play catch with a stranger!”
Of course, I owe it to my readers to take a bold stand on Ashley Madison.
How do I feel about cheating? Am I ever tempted? How would I react if my spouse’s name was released on the cheater list?
You deserve to hear me issue honest answers to these salient questions.
And I vow to provide that candor the instant there’s irrefutable proof my darling wife no longer reads this stupid blog.
Come September, we’ll have been married 19 years, long enough that younger men on the precipice of matrimony have actually asked me for advice, which I freely bestow.
I start these counseling sessions by asking these young romantics the question: “If marriage is so great, how come God is still single?”
Talk about Mr. Right. When it comes to eligible bachelors, even the great Derek Jeter is a distant second.
I don’t think newlyweds understand how little nuance there is in that part of the wedding vows that insist betrothed couples must now forsake all others.
The clause includes precious little wiggle room. You can’t make exceptions if you’re drunk, horny, lonely, feeling scorned, available or looking especially sexy in that pretty new peek-a-boo dress.
It’s why the country music genre is such an enduring money maker.
I think most people get hitched believing in their heart of hearts they’ll never cheat, but if they do, they believe they’re marrying a person who will, of course, be understanding if he or she happens to stumble. This same person — hallelujah — is so divinely faithful he or she would never dream of cheating.
In fact, most people eventually learn they are married to emotional human beings just like themselves, people who will think of severing things more carnal than a relationship if they find out they’ve been cheating.
Of course, I’m looking forward to reading all the salacious details about the hypocritical family-values celebrities — thank you, Josh Duggar! — but hope our neighbors will be understanding about the human failings of those who slip.
I like it anytime events take a whack at the Puritanical underpinnings upon which so much of America is based.
But there’s bound to be some necessary soul-searching from people who think they can get away with something that means so much to someone they say they love.
If you’re one of those people and are feeling tempted, you’re welcome to get in touch with me. We can hook up.
Bring a baseball and a mitt.
You and I will together enjoy the kind of pastime where getting caught actually makes playing all the more satisfying.

Related . . .
How come there’s no Mrs. God?
What happened when I spent 72 hours handcuffed to Val
I cry over commercials (farewell, Capt’n Jeter!)
A great day for baseball … let’s play 2! Or 3!
I play Centerfield
Posted by Chris Rodell at 11:43 AM