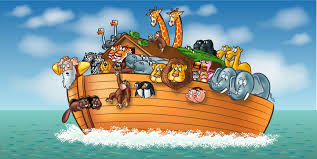 I wonder how different the world would be today if on Noah’s ark someone had thought to bring along a fly swatter.
It’d probably be a lot less annoying.
They drive me nuts.
Bees do, too, of course. But bees provide tangible benefits. They pollinate and make delicious honey.
What do common houseflys do?
Well, I looked it up. The answer doesn’t bolster their case for ark inclusion.
Each female fly can lay about 500 eggs, a reproductive feat that makes Michelle Duggar look like a piker.
How do these flies contribute? They spend their entire month-long life cycle feasting on garbage, carrion and feces.
I could see this being beneficial to the circle of life only if they were capable of taking really, really big bites, but a diet like that magnified many times over would lead to a slew of other bigger and even more disgusting problems.
I wish some Biblical archeologist would announce he or she has found Noah’s passenger manifest.
I have to imagine many of the species with which he started out didn’t make the entire cruise, which if you believe Genesis 7:11-13 lasted 370 days.
Some likely died en route.
Remember, the ark had no qualified veterinarian. Crew skills likely tended toward  farming, carpentry and, at least with the skipper, the kind of meteorological wisdom even weather savants like Al Roker are bound to envy.
I nurture a theory that unicorns were on the ark but became too cross-eyed to function and just died off only to be resurrected on the “My Little Pony” show.
Some animals may have been deemed too dangerous or annoying to preserve.
Maybe scores of vicious, stinky animals we’ve never heard of once roamed the earth and either Noah or one of his crewmen decided to play God and just tossed the varmints overboard.
We’d have no way of knowing.
If that’s the case, I wish they’d have gone a few steps farther and gotten rid of all the snakes, rats, roaches, pigeons, etc.
If our neighbors’ husky had been on the voyage, it’s likely we’d now be living in a dogless world.
Maya is left out all day and all night and does nothing but bark, bark, bark. It’s endless. It robs us of both sleep and any chance of summer peace.
Maybe I’m being too harsh.
I shouldn’t say I’d get rid of the dog. That’s cruel.
I’d get rid of the neighbors.
I’d also like to see archeologists announce they’d found a menu detailing just what did they ate on the ark?
Cruises have always been about rapacious gluttony. Why should Noah’s cruise have been any different? Guaranteed, there was no casino. There was nothing to do but either tend to the animals or eat them.
And I can practically guarantee there was no salad bar. It had to be mostly all protein.
The animals, we are told, were boarded two-by-two. Many of them likely reproduced during their time. Screwing was all they had to do, much like some of today’s swinger-themed cruises.
But none of the tasty mammals were as prolific as the houseflies (aside: what did cavemen call houseflies?).
You’d have to think over 370 days the crew developed a toothy fondness for particularly delicious animals.
I wonder if there were some now-forgotten animals made of such delicious substance that they were right there on the ark eaten to extinction, animals so tasty that it was impossible to stop eating them until it was gone.
Like really big Peeps!
Or maybe at one time there were animals they called Bacons, too delicious to survive.
I guess I wish Noah had been a little more choosey. The world is full of animal annoyances
Some of them legitimate, some what I guess you could call “petty.”
As for annoying humans, well, that ship has sailed.
No sense in complaining. We just have to learn to live and let live.
So I’ll not say another word.
Not one peep.

Related . . .
Noah at the wave pool
Ark building floats man’s boat
To bee or not to bee
When stinkbug constellations are stellar
My business plan: Keep feeding the unicorn


Bark up/bark down: A neighbor’s dog left out in the cold