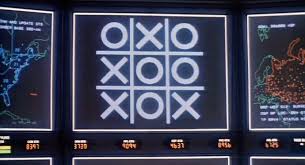 I’m so old school I always feel like shouting “Paul Lynde to block!” every time I see a hashtag.
I wonder if devotees of tic-tac-toe resent how hashtags have stolen the thunder of one of the world’s oldest games.
Archeologists have unearthed evidence an early version of tic-tac-toe was played in the Roman Empire as far back as 100 B.C.
So it’s certainly conceivable Jesus Christ played tic-tac-toe.
Remember, He roamed the earth centuries before the advent of NFL on-line fantasy leagues and needed something to do to kill time.
It’s also possible, Him being Christ, He was pretty good. He could have been the Johnny Beauregard of His day.
As far as my superficial research can tell, Beauregard is the Babe Ruth of tic-tac-toe.
I googled “tic-tac-toe world champion” and found a 2011 link to a possibly satiric story that said Beauregard defeated nine grandmasters during a world championship held in the basement of a restaurant called Mike’s All-You-Can-Eat BBQ Buffet.
I say possibly satiric because the canon of authentic tic-tac-toe reportage is practically non-existent.
The story said Beauregard is the undisputed champion of the World Tic-Tac-Toe Federation.
The WTTTF!
No prize money is mentioned, but I sense the stakes were far less than they were in what was the most famous tic-tac-toe game ever played. That was the one between Professor Falken and the computer Joshua in the great 1983 Matthew Broderick flick, “War Games.”

In the end, the computer thoughtfully decides against launching World War III when it learns “the only winning move is not to play.”

Imagine that. Thirty-two years ago, computers were advising against computer games.

My how times change.

Same goes for our keyboard symbols.
Remember, hashtag, that most modern of symbols, is still referred to on our most advanced North American smart phones as the “the pound sign.” Elsewhere, it’s the “hash sign.”
Will we one day hear automated phone systems advise us, “For more options press the hashtag sign.”
Sounds awkward.
Why hashtags are called “hash” tags is murky.
Hash, of course, is an often tasty meal composed of pieces of meat or vegetable cut into small pieces and fried; hash brown potatoes, for example.
But I’ve never seen # on any menu and couldn’t find it anywhere on a menu for an upscale Chicago breakfast restaurant called HASH. No mention of cannabis-based hallucinogens, either.
I guess the symbol is limber enough to support all those varied definitions — pound/number/hashtag — but I predict we’ll soon see keyboards with multiple slashes on hashtags.
The innovation could revolutionize tic-tac-toe the way 3D chess did on the rec dec of the USS Enterprise, which Joshua the computer would obviously prefer to Global Thermal Nuclear War.
It’s a sensible myth that hashtag began its twitter rise January 15, 2009. That was the day Capt. Sully Sullenberger “landed” USAirways Flight 1549 upon the waves of the Hudson River. Twitterists began using #1549.
The plane went down, hashtag took off.
A more likely and verifiable story involves a Bay Area techie who’d grown fed-up with how disorganized Twitter had become.
And Sunday at precisely 3:25 p.m. hashtag will celebrate its 8th birthday. That’s when Chris Messina tweeted, “How do you feel about using # (pound) for groups. As in #barcamp [msg]?”
Messina later said, “It was one of those things where I had so many haters in the beginning that I thought this thing would never pick up. But, secretly, I sort of felt like, ‘Come on, guys, this is the simplest thing that could work.’”
Two days later, another techie, Stowe Boyd, suggested the # symbol be called “hash” tag because it sounded catchier.
So Happy 8th Birthday, hashtag!
What will you be when you grow up? You’re future is bright.
I’m sure you’ll hash it all out.

Related . . .
A short story on dots & periods with some good points
Let’s make the Bible fun to read!
To err is humon; blogs & typos