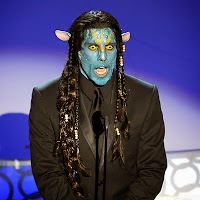 I’d intended to write an Oscar advance about how the worth of the yearly gift bags should be tied to the overall appeal of that year’s movies. That means instead of $80,000 worth of elite chocolates, perfumes and week-long trips to Hawaii, attendees this year would be getting Bazooka Joe bubble gum, Old Spice deodorant and hardware vouchers for Home Depot.

But Val’s away visiting family in Florida -- lucky kid -- and I am doing something that’s throwing my whole happy schedule into chaos.

I don’t know how single parents do it -- I mean single parents who want to maintain an otherwise pointless blog. I need at least 90 uninterrupted minutes to put together something I think is coherent. It’s not going to happen until at least Monday afternoon.

So here’s a 2009 piece that expresses my contempt for the big show tonight. I thought it was a particularly unsatisfying year for movies, and that’s saying something. I might watch a bit, but it’s unlikely.

Today’s schedule? I’m attending the 100th birthday party for my friend, the great Angelo Cammarata. I’ve linked to a story about Ange below.

This isn’t counting anything from the Axis of Apatow/Aniston or others who earn millions making the kinds of movies they probably used to denounce back when they had youthful credibility.

For the record, some of the top-of-my-head my favorite movies from the past 15 years or so are “The Big Lebowsky,” “American Gangster,” “Hot Fuzz,” “The Shawshank Redemption,” “Big Fish,” “Gran Torino,” “Sideways,” and “Up in the Air.”