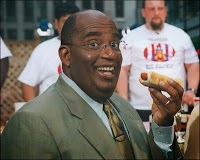 From the odd story surge of the week comes “Weather Man is my Superhero!” The news that there was interest in this 2009 came from out of the blue. Which makes sense because that’s from whence most weather stories emanate.

I’m very pleased when a group of strangers stumbles onto one of these early posts. This one’s decent. Check it out.

(734 words)
Our 8-year-old was backseat babbling about future occupations when one option startled my innate chauvinism to spring to life.

She said she wanted to be a weather man.

Now, setting aside that in 10 or so years the pharmaceutical conglomerates will probably have sex change pills that will render the gender side of that ambition instantly possible, I corrected her in a sexist kind of way.

Actually, she could be a weather girl right now. She can appear cute and cheerful while saying things like, “And a high pressure system is likely to bring precipitation to the western Pennsylvania region by rush hour, so give yourself a little room during the daily beep ‘n’ creep!”

But despite the common usage of the phrase, I’ve never seen a weather girl on TV.

They are weather women. They’re fully developed (often abundantly so), have children, drive motor vehicles and fret about things like how the new hi-def cameras will detail that budding mustache that needs cosmetic harvesting.

But I couldn’t bring myself to tell Josie she wants to be a weather woman.

It sounds too superheroic.

“And coming up after the sports, it’ll be Weather Woman Tiffany Rialto!”

Again, it’s blatant sexism because I do consider weather men to be superheroes. I spend a great deal of my waking hours wondering how I could earn public acclaim and lots of money for doing basically nothing when every Weather Man is already living that dream.

Unlike the anchor, no one accuses Weather Man of having a political agenda. No one scolds Weather Man for being silly -- in fact, it’s part of the job description. And Weather Man never has to inject those awful “ . . . and on a lighter note . . .” transitions when pivoting from a multiple homicide to something fluffy.

Weather Man is the lighter note.

Like much of the country, western Pennsylvania is recovering from a nasty bout of storms and flooding that brought the region to its knees. So the forecast is an important aspect of our lives these days.

And, really, when isn’t it? Most of the local news by now is one big rerun. “Another shooting in the Hill District. This councilman’s crooked. Traffic sucks. More layoffs . . . and now it’s time for the weather!”

No matter the forecast, it’s impossible not to brighten when up when the weather comes on. There’s just something so God-like about a mortal meteorologist who can stand there and boldly predict what the world will be like in five days.

I’ve begun paying more attention to the weather ever since we got our lavish HD 50-inch TV a couple of years ago. Watching the Weather Channel now reminds me of the old Pink Floyd laser shows that used to entertain the burn outs down at Pittsburgh’s old Buhl Planetarium on Friday nights.

The more violent the storm, the more serenity I feel watching the squishy ameboid blobs floating across the screen. I find myself being soothed by the deep reds and purples that have my neighbors running for the lives.

For years I used to pitch in vain a story idea about how America’s top weather forecasters would predict a flood of Biblical proportions.

The idea was based on the premise that satellite technology is capable of predicting long-range forecasts that will show God’s wrath emerging from on the horizon. Today’s unflappable meteorologists can forecast killer hurricanes, tornados and floods in such measured tones that I find myself thinking, “Hmmm, well, maybe we could squeeze the picnic in between twisters . . .”

I’d like to hear how a guy like Al Roker, my favorite, would use today's technology to forecast torrential rains of 40 day and 40 nights. How would he deliver the news? Would he predict doom? Advise mass ark building?

I believe he’d be sufficiently grave and then say, “But take heart, things should start turning around on the 41st day when we’re predicting patchy sunshine with warming temperatures. So don’t forget to pack some sunscreen!”

These are tough times.

Thank God we have Weather Man to show us the silver linings.

I nearly killed a weatherman golfing
Posted by Chris Rodell at 9:24 AM