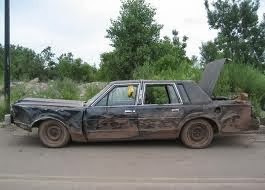 It was one year ago today we jetted down to Florida for a splendid family vacation. Ah, to really, really turn the clocks back.

This is a story that often bubbles up in popularity. It’s about my history of rental car abuse.

(744 words)
I always feel like I’m being asked to marry a second bride every time I’m at the rental car counter.

“Do you, Chris Rodell, take this Toyota Corolla to have and to hold, with your insurance or ours and will you return the vehicle nick-free and topped off with a suitable gasoline for this make and model?”

My great fear is that one day they’ll install lie detectors at the car rental counters and mine will explode when I promise to take good care of their car.

Really, it’s more like negotiating to pick up a hooker.

It’s been years since I’ve priced hookers, but $30 a day sounds like a bargain. You don’t have that emotional attachment and you can be as good and dirty as you like. The car doesn’t care. It’ll still take you for a good, long ride.

That’s the way it was with the white, four-door Corolla we rented last week for our jolly traipse across The Sunshine State.

Back before I fully grasped the consequences of my actions, I used to beat the living daylights out of my rent-a-cars.

It’s another way from which I differ from my father-in-law. He treats rental cars with respect. He believes they contribute to society.

He treats them in ways that make me think he wishes his daughter had met her husband at the Alamo parking lot and that his sturdy frame rolled around on four steel-belted all-weather radials.

I learned this after he tricked me with a question as he got in the right front passenger seat after our visit to lovely New Smyrna Beach.

“That’s fine,” I said, trying my best to be solicitous. “A little sand’s not going to hurt a Florida rental car.”

“That’s the attitude that drives the price of rental cars up for everybody. When one person doesn’t care for the vehicle the maintenance costs go up for everyone.”

I noticed he’d yet to buckle his seatbelt as he delivered his stupid little lecture. I briefly wondered how he’d react if I floored the accelerator and sped across the sandy parking lot straight into a sturdy telephone poll about 30 yards away.

I have a different view. I make the rental car earn my respect.

I learned to do this just about 90 minutes west of where we were parked. It was at the cattle ranch that’s been part of my friend’s family for three generations. I mentioned it yesterday. It’s 1,000 lakefront acres of cows, swamps, gators, open range and woods, all of it dotted with ankle-high piles of rich cow poop.

In other words, it was the perfect place to test drive hapless rental cars.

At first I was an unwilling participant and it took me many, many beers to get comfortable with what they had in mind for the rental cars I’d bring for my frequent visits.

They called them “ranch rides.”

We were all in our early 20s. They’d fill the rental car with boys and beer with the priority beer going in first.

Then about midnight we’d go roaring off on our merry way.

We’d offroad the cars on rustic pathways that narrowed as we plunged through the increasingly thick tropical vegetation.

I remember one time we were so far out on the perimeter that our scout -- and he was drinking double fisted -- saw no place for the car to maneuver. The car’s front fender was nestled against a 20-foot palm tree and squeezed between two others so tightly that opening the doors was impossible. We were absolutely trapped.

It was for them ranch ride nirvana.

He leaned into the driver’s side window and told me, “The root base of a Florida palm tree is very shallow. Just gun it and the thing will tip right over.”

I remember trembling back at the return station as the tech circled the car looking for dents.

“There’s a lot of sand under the wheel wells, Mr. Rodell. Did you drive this car on a beach?”

“Well, that’s all right. A little sand’s not going to hurt a Florida rental car.”

• Excessive traffic lights driving man to drink
Posted by Chris Rodell at 9:36 AM

I can suggest you car rental company with good cars and prices http://car-traveler.com/