Impatient to be outdoors & dancing in my underwear 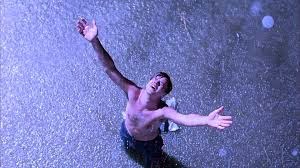 (670 words)
The last six grinding months convince me there ought to be a musical counterpoint to the Beach Boys “Endless Summer.”

Because this has been and endless winter and I’m about beat.

I’ve worked up numerous good sweats this winter, but they’ve all been while shoveling snow up to my ass. Only the insane would entertain thoughts of taking off his or her clothes and dancing around in their underwear in those conditions.

It’s something I do in summer when I’m sure the girls are far away and it’s raining too hard for the crazy old birdwatcher down the street to be out with her binoculars.

I don’t remember doing it much in our old cramped little neighborhood where such liberated behavior would have been scandalous, especially if any of the neighbors would have spied me drop my drawers which I sometimes do when it’s really pouring.

It’s incredibly refreshing and I encourage you to remember to try it this summer, that is if this summer ever comes.

Yesterday’s morning temps were once again in the low 20s.

That means the only dance I do outside is what I call “The Arctic Macarena.” That’s where you rhythmically pat with both hands the twelve pockets in your multi-layered coats to detect the location of your keys, gloves, phone, etc.

I bought a brand new Pea Coat two weeks ago at a criminally misnamed “End of Winter” sale at Penny’s. It was a $150 coat on sale for $40. By the time I got through all the promotions they were throwing at me I snagged it for $23.

I love it. I was thrilled at the deal and it’s a dandy garment.

I got it home, basked in Val’s standing ovation for my rare burst of savvy shopping and said, “Well, I’ll just put this in the basement for next winter when I’ll need it.”

I’ve needed it every day since.

And I love it even though whenever our 7 year old sees me in my Pea Coat always asks if I’m also wearing my Poop Pants.

And she’s right. That’s funny. It was hilarious the first time, but has become decreasingly less funny after about 30 repetitions.

This is the winter that has me questioning why I live where I do.

I love the four seasons. Really, I do.

But I resent living in a region when any one season hogs a whole half the calendar. That’s what happened this year with winter. It’s been six months, October through March.

That means we’re going to be cheated on spring, summer and fall, which now have to divvy up the next six months in fair proportions because the tilt of the earth won’t permit the seasons fair comp time. It’s not like spring can bitch to the boss that winter stayed late so every other season should by all rights get extended.

The good news is Opening Day is Monday and the forecast calls for room temperature. Well, for me at least.

It’s as much fun for me to watch the game here at the bar as it is to attend in person. Dave always makes a big deal out of it. He has footlong hotdogs, nachos, peanuts and Cracker Jack. And all my friends’ll be here.

And the weather’s supposed to finally be decent for the ball game, too. The high on Monday is supposed to be 62 before tanking again the very next day.

But this winter that’s had a stranglehold on us will one day end. It has to.

Until then I’ll just have to tough it out.

All pissed off in my Pea Coat.