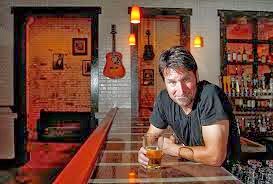 (961 words)
I can always tell when I do something that disappoints my friends my wife will be elated and vice versa. It’s very difficult for a convivial family man to do anything simultaneously satisfying to both demographics.

So this weekend was in some ways sort of a wash for me.

On the downside I disappointed my friend. On the upside, I avoided being murdered by someone who 25 years ago swore he’d kill me if I ever behaved in the wussy way I behaved on Saturday night.

Friday night I stayed up partying until 6 a.m. at my buddy Quinn’s new bar in Columbus.

Quinn’s had a terrible year. His wife left him shortly after he learned his mom had terminal cancer; she passed six months later. It was two years after the death of the step-father who raised him.

Me, I had a much better year.

I know, it’s not like I need yet another bar-owner friend to inebriate me for free, but it’s unwise to maintain some commodities in quantities fewer than one.

It’s why people keep spare tires in their trunks.

His last bar was Andyman’s Tree House, which he and co-owner Andy Davis sold in '08, shortly before Davis died unexpectedly in 2010. That bar was named by Esquire as one of the 50 best bars in America.

I think Little Rock is even better.

Because every great bar needs at least a Little Rock.

And rock it does.

See, Quinn’s also the singer/songwriter who cryptically named his band Los Gravediggers. His bandmates have included Dan Baird of the Georgia Satellites and Bobby Keys of the Rolling Stones. Quinn's the best songwriter I know and among the best songwriters I’ve ever heard.

He’s that good and it’s a confounding disappointment in a world awash in so much lousy music that Quinn’s music struggles to be heard.

And he’s very funny. When he learned former Hootie Darius Rucker was going to switch genres to country he suggested he be called “Brocephus,” which I’ll not explain save to say it’s an off-color country music joke about a man of color.

We were roommates for one year in college when I was in the midst of a 10-year heyday for running wild. Often running wild and naked.

Quinn and our buddies loved that part of me. That’s from whence the murder threat stemmed. I remember him telling me the night after some vivid antics that he and another friend were discussing what then was my legend.

“We said, ‘What are we going to do if Rodell ever changes?’ We decided we’d have to kill you. We wouldn’t be able to stand being in a world where you’d disappoint us by behaving like a normal, boring guy.”

We stayed up drinking in Little Rock straight through until 6 a.m. I laughed myself hoarse.

I was pleased that after all these years of waking up at 6 a.m., I could still when duty called stay awake until that time.

But — and I’m not ashamed to admit it — the revelry turned me into a boring old man by Saturday afternoon. I was eager to get home. It was causing me to reconsider our plans to drive to Athens and meet some other old Ohio University friends and again drink the night away.

And I’m at an age where I don’t belong in many of the bars in Athens. To spend a night amidst a mob of binge drinkers 30 years younger than me requires a kind of cool I can no longer summon.

After about four hours, I told Quinn I’d had enough. I’d be walking back to the hotel at 11 p.m. I told him I didn’t want to be wrecked all day Sunday and that I was looking forward to spending the day with my family.

He looked like presidential candidates must look the instant they’re told, despite all the rosy poll results, they’ve lost the election. He was crestfallen. He demanded a recount.

He couldn’t understand how I could want to do anything with my family when I had an opportunity to again get falling down drunk with him and our pals. I told him I planned on being on the road by 7 a.m.

“Why so damn early?”

In hindsight, I really should have told an artful lie. The truth didn’t make me look any better in the eyes of one of the very coolest guys I’ve ever known.

I slept lightly back at the hotel, fearful he might fulfill his ancient oath and slay me in my sleep.

It’s an emphatic example of just how difficult it is to have a family you love and enjoy and friends about whom you feel the same. The one group will never understand why you want to spend so much happy time with the other and the two will never fully reconcile.

It probably gives you some idea, too, of why it would be impossible for a guy like me to ever hold down a full time job.

See, I love The Muppets, too.