Results of my weekend crashes, the computer and the car 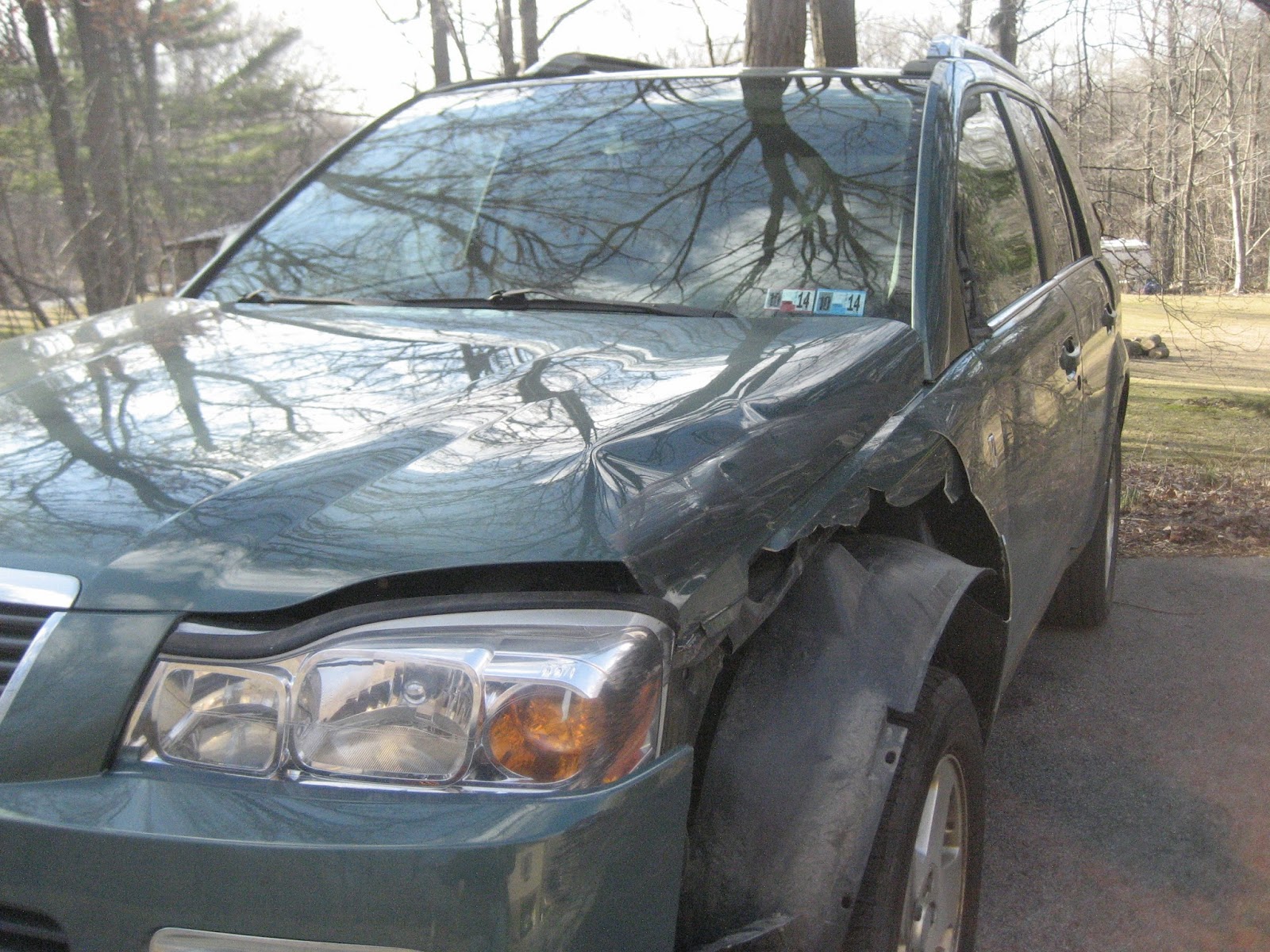 (1,436 words)
Determined to overcome vexing computer problems, I made the hour-long drive into Pittsburgh Sunday morning with the expectation of returning home about $1,300 lighter. I figured I’d need to buy a new laptop.

Turns out I was half right.

And I spent a good portion of the last 24 hours wondering if I’d had a very good or a very bad day.

On Saturday the friendly repair gang at the Apple store in Shadyside said my computer would be ready Sunday, but they never sent word if it was done or if the hard drive restoration problem had been resolved.

So I did some resolving of my own: I decided I was going to drive in and lay out about $1,300 for a new MacBook Air. My MacBook Pro was about five years old and I figured I’d better shell out for a new one rather than spend more money on an old one that was overdue to expire anyway.

I don’t like spending money I don’t have, but I do like getting shiny new stuff and the Discover card could float the balance until that long overdue Powerball ticket finally cha-chinged.

Understand, I didn’t even know if it was ready. So driving there in time for the store opening at 11 a.m. was a bit of risk. I’d spent a good deal of time in the car the past two days trying to get this thing fixed and was eager to get home for some Sunday relaxation.

Lo and behold, they told me it was done, it was repaired, and the charge was just $59.

This was gonna be a great day!

I decided to stay an extra 90-minutes to make sure the back-up went smoothly. I’m scrupulous about backing up my hard drive.

In fact, I’m so scrupulous about backing up my virtual essentials I decided to purchase another $100 external hard drive in case the first hard drive ever failed simultaneously with the computer.

See, I can be very prudent.

Well, most of the time.

Really, it did feel like I’d already hit a jackpot. It’s a wonderful feeling expecting to spend a big chunk of change and learning the expense is unnecessary.

So I was feeling pretty good around 1 p.m. when I’d stopped in for some Pad Thai at Lulu’s Noodles in Oakland. It’s delicious. I was figuring I’d be home around 2:30 p.m. in time to commandeer the TV to watch golf and March Madness. And I’d have what now seemed like a nifty $1,300 surplus.

And that all would have happened just as planned save for one slight miscalculation of about eight inches over about .05 seconds.

It was that close.

As I said, I’d been in the car a good bit the last three days and was eager to get home. I was driving east on a pothole-strewn stretch of Fifth Avenue near Wilkinsburg.

It was the kind of calculation each of us makes maybe four or five times a day; the green light turned yellow. I had a split second to decide: could I squeak through or should I slam on the brakes?

I accelerated. It was an aggressive move by a fully engaged driver.

Do that 1,000 times here in Latrobe, birthplace of Fred Rogers, and you get through the intersection unscathed by motorists who drive mostly like Fred. Here the only other aggressive driver of any renown is Arnold Palmer and he does most of his aggressive driving with a Callaway Big Bertha Alpha on dogleg par 5s over at Latrobe Country Club.

Big cities have more than their share of aggressive drivers. On Sunday at about 2 p.m., I ran right into one. He began advancing through the green light the instant it turned.

So there could be no weaseling out of it. This wreck was my fault.

I told him so as soon as we’d pulled off the road to powwow.

I thought for a moment I’d never seen a vehicle like his. Then I realized I was mistaken.

I’d seen one similar to it in the 1971 Stephen Spielberg movie “Duel,” about a truck from hell being driven by an unseen madman out to terrorize a traveling salesman played by Dennis Weaver. But the truck’s the movie’s real star. It’s filthy, beat to hell and exudes menace.

That’s what the modified Dodge monster truck I hit was like. I swear its finish was like like black stucco, almost like shark skin. I was afraid to lean against it for fear it’d shred my skin. It looked indestructible.

And it was at least when it was up against a once-sporty 2007 Saturn Vue.

He lost a driver’s side headlight. The fender may have been scratched, too, but it was impossible to tell. He estimated his damage at $75.

My car was another matter. The driver’s side front quarter panel was destroyed, the hood was wrinkled, the rearview mirror was right then in the middle of the intersection getting pulverized. And the front and rear doors were tattooed with garish rubber from his monster truck tires.

Sitting in the driver’s seat, however, it looks like nothing’s really wrong. Another eight inches and all I’d have lost was that rear view mirror.

I estimated the damaged and figured, yep, that looks like it’ll be at least $1,305.

The guy’s truck may have appeared Satanic, but the guy was an angel. He absolutely could not have been more understanding.

You never know how someone will react in a tense situation like this. It’s not uncommon for threats to be issued, for fists to fly or guns even to be pulled. Heck, the first thing many do is summon the police or reach up and start rubbing their neck for phantom chiropractor-enriching injuries.

I thanked him for his reaction.

“Oh, man, I could tell within the first 30 seconds you weren’t going to be an asshole about this so there was no point in making it any worse for you.”

He’s a molecular biologist who runs a construction company. It’s as fascinating a story as it sounds, one I’m sure I’ll one day share.

He asked what I did for a living.

I told him I write books.

He asked what kind.

The kind, I said, that aim to help people learn how to keep bad things from ruining good days.

He thought that was hilarious.

My car is perfectly fine to drive, but I don’t know how the other parents will feel when I show up in it to pick up their kids on the nights when it’s my turn to head the car pool.

It’s been about 20 years since I’ve had a claim-worthy accident, so I’ll probably turn it in for cosmetic purposes.

I got home and, as planned, switched on the tube and enjoyed the sports. The girls had been out and returned all abuzz about the accident. I was honest and told them it was all my fault. I think a kid can learn a lot from how a parent deals with unexpected adversity.

And I began to think about those eight inches and that .05 seconds.
With just a bit more deft snap of the steering wheel the whole accident could have been avoided. That would have been great.

Then I thought about this: What if if had been eight inches in the other direction?

The vehicle frame would likely have penetrated the driver’s safety cocoon. The car would have been totaled. I could have broken a leg or an arm and lost my ability to control the car’s direction.

The Saturn could have jumped a curb and struck a bystander waiting for a bus. That bystander would have been tending a baby carriage.

I spent the rest of the night enjoying a nice pasta dish Val’d served up. We sat in front of the fireplace, watched some shows, played some games and I got to read some bedtime stories to our darling 7 year old.

We tucked the kids in, said some humble little prayers and then Val and I had a glass of wine and spent the rest of the night relaxing in the welcome peace.

Hell, it was one of the very best.


Getting all kill crazy over parking spaces
Posted by Chris Rodell at 11:47 AM

Yup, all around, that was a good day. It's all about proportion.

My criteria is, no one died. That makes it all okay.