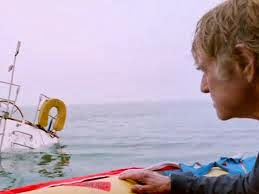 (895 words)
I've long said being a freelance writer is like being adrift in a rubber raft in storm-tossed waters far out at sea. There is isolation and often grave concern.

And that being a freelance writer with tech problems is like being in that rubber raft and suddenly hearing an urgent hiss.

It's deflating in every sense of the word.

This week I'm hearing the hiss. It's my turn for computer troubles.

That explains why I didn't post anything Thursday or Friday.

Well, that and March Madness. Those are two of my favorite days of the year, so I probably wouldn't have filed anything Thursday.

This is upsetting to some of my friends. They enjoy reading the blog and not having it show up with the frequency they've come to expect is unsettling.

What's surprising is how many readers complain if I miss a day or do something that makes it look like I slept in a bit.

It's like they think I'm cheating the boss like I used to when I was earning an actual paycheck to write way back in 1992. People seem to forget I don't earn a dime for blogging.

It's the reason I used to say blogging was the journalistic equivalent of running a lemonade stand. Then it dawned on me that even 8 year olds who run lemonade stands have the good sense to at least charge a quarter for lemonade.

I heard from one friend the other day and he began complaining that I'm posting too late in the day to suit him.

"You make a big deal about being at your office at 6 a.m. to write the thing and how it only takes you an hour or two to write it, but then it doesn't post until 2 p.m. What the hell?"

He's correct. It is my custom to crawl out of bed and be here at the office before many roosters rise.

I do this because I think I write best when my mind's good and cloudy. If, say, I started at 10 a.m., my mind would be functioning logically and I'd realize what a folly it is to devote so much time to writing for free.

Reader tip: I think it helps if you're foggy-minded when you read it, too. A clear, sharp mind is a brute impediment to enjoying so much of life's wonder and whimsy.

Many mornings I'll have a good head of steam up and will have to shut it all down and go drive Josie to school. And I love doing that because it gives me the opportunity to incrementally brainwash her with music she won't hear anywhere else.

So some mornings I get the blog done and ready to go at about 10.

So I go for a walk. Then I go to the Giant Eagle and get a salad and maybe some soup or lunchmeat for a sandwich.

That puts me home at about 11:30. I often file then, but if there are some compelling lunatics competing for that day's Showcase Showdown on "The Price is Right" I'll watch. Then Val and I will have lunch and watch something.

So now a blog that's been done for nearly four hours is still not filed.

During all this distraction, it's never once occurred to me that there are gainfully employed people out there staring forlornly at their computer screen and refreshing it over and over waiting for a something new to appear.

But it's becoming clear some readers are at 11:50 impatiently staring at some two-day old post and thinking, "That Rodell bastard is probably right now watching Amber reveal some Showcase to Tahiti and shouting, '$22,500! $22,500!' like Ben from Modesta can hear him through the TV. And here I sit waiting to read if he'll today share his thoughts on the human nose being capable of differentiating between one trillion different scents. Jerk."

If you do feel that way, here are some suggestions: Go read some of the older posts. There are more than 1,000 of them. Or diminish the anxiety by calling some old friends and telling them you missed them and had time to kill because the blog you look forward to may be experiencing either technical difficulties or is communing with Drew Carey.

Or maybe you'd better think about calling a competent psychiatrist.

You can tell him or her about the blog, too!

Me, I'll be spending another day calling on tech gurus and hoping to figure out what's wrong with my 2009 MacBook Pro.

I wrote this on my wife's generic and it gave me fits, which I'll use an excuse for why this post lacks some of usual tightness to which I aspire.

Either way, come Monday or Tuesday we'll have that hole patched and we'll get back to paddling on this endless voyage to nowhere.

It's great knowing so many of you are along for the ride.

Mom struggles with new remote
Posted by Chris Rodell at 9:51 AM