Happy Birthday to the telephone! Today it's 138 years old 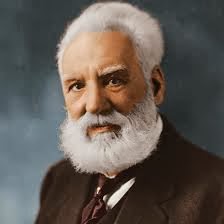 (688 words)
It was 138 years ago today Alexander Graham Bell was issued the patent for the device that was destined to dominate the planet.

Yes, today is the birthday of the first telephone.

I plan on spending the day asking callers how much different they think the first phones would have sounded if they’d been invented by a man named Alexander Graham Horn.

Of course, it’s unlikely you’ll hear a single phone ring today. With the popularity of ringtones, phones are more likely to sing, than ring.

You won’t dial one either. It’s been more than 20 years since most of us have had to dial a phone.

I kind of miss dialing. It was very sensory, at once tactile, visual and sonic. I liked the little clicking sound the old rotary phones made. It gave dialing a phone a real sense of accomplishment, even if the accomplishment was only ordering cheap pizza.

Today many of us have love/hate relationships with our smart phones.

We love having them, but hate knowing that you’re allowed to have one, too. The untethered phone has unleashed rudeness and uncouth behavior to run amok.

It happened to me again just the other night. Ran into an old friend I hadn’t seen in years. The instant he saw me he began diverting my attention from him straight into his smart phone.

He showed me pictures of his kids, where he vacationed, and one obscene gag shot of a fancy wrist watch with a subtle pornographic image in the background. He thought it was hilarious.

The inventor is one of the most remarkable men in history made even more endearing when you learn he had a life-long interest in kites. So he was a genius with a little bit of Charlie Brown in him. That might help explain why the first telephonically spoken words seemed so mundane.

It’s not exactly, “One small step for man, one giant leap for mankind.”

A good knock knock joke would have been better.

But I like that the gist of Bell’s call -- “I want to see you” -- involved not talking, but getting together.

A phone is always a poor substitute for having a really great face-to-face conversation.

What’s interesting is how few people today are using Bell’s invention for its intended purpose: Talking. Most everyone screens calls in order to avoid talking to anyone. We prefer text, IM, e-mail, etc.

So today a device that was created to get people to talk to one another has evolved into one that is beloved for features that keep us from having to ever do so.

Or is it to not talk?

I used to have great conversational phone skills. That was back when I was doing many intense true-life stories about people who survived harrowing dramas involving horrific plane crashes, vengeful lovers or life-threatening diseases.

I’d spend hours on the phone with these people engaged in conversations to that to this day remain indelible to me.

It all kind of ruined me for telephone small talk. Today I hate having to talk on the phone.

It’s that way with old friends and relatives. I want them all to know I love them and miss them, but just hate having to call them up to say so. The conversations always go on for too long and inevitably hit an awkward dead spot.

I wish I could echo what Bell told Watson and convey all I can with just those five words: “I want to see you.”

Of course, maybe that’s just one of my individual quirks.

Or maybe in light of today’s anniversary, we should just go ahead and call it what it really is.