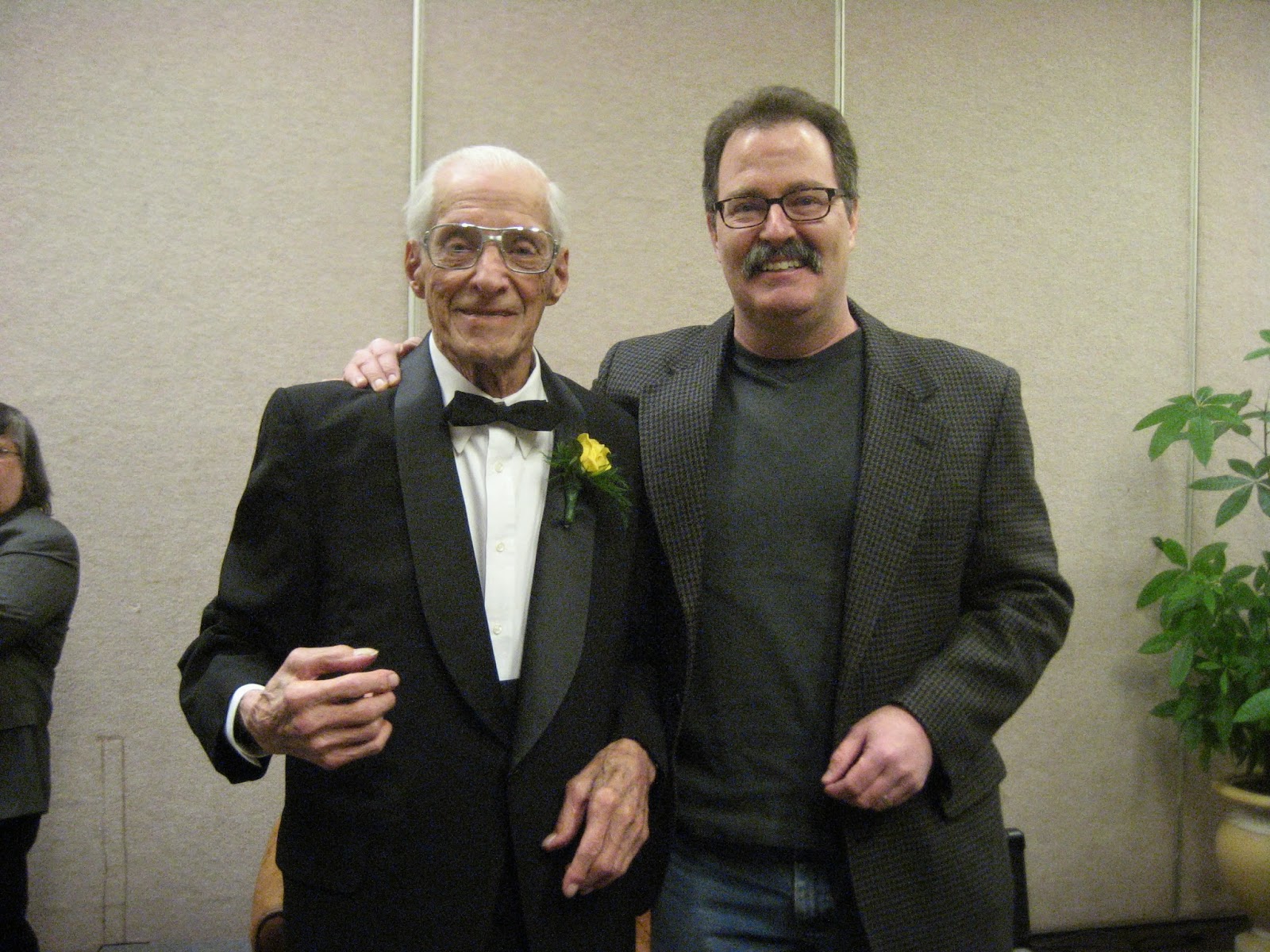 (825 words)
I devote a lot of time anguishing over and writing about how difficult it is for me to earn money. Writing, as I often tell literary aspirants, is not a livelihood that leads many to wealth or solvency even.

But here’s the caveat: It enriches in so many other soulful ways. In those intangibles, I’m practically Thurston Howell the Fourth.

I was reminded yesterday of one of the biggest intangibles. Well, maybe not the biggest, but certainly the oldest and one of the very best.

Yesterday, I was flattered to be invited to the 100th birthday party of the great Angelo Cammarata. He’s the Guinness Book of World Records longest serving bartender, having poured his first beer at midnight on April 7, 1933, the exact instant Prohibition in America ended.

He “retired” for health reasons in 2009. It wasn’t his health that was the concern. His then 59-year-old son, John, who with his Dad and brother Frank co-owned Cammarata’s Cafe in Pittsburgh’s West View neighborhood, had heart problems and decided it was time to sell the bar.

The end of Camm’s historic run was considered significant enough for CBS News to send human interest correspondent Steve Hartman to cover the party. It’s not often the retirement of a humble bartender makes the national news.

Hartman’s a prince of guy, but he wasn’t invited Sunday.

I was one of about 100 people at the party, but only one of maybe two or three who wasn’t either a Cammarata or a Cammarata in-law.

“It’s only his children and grandchildren,” John told me. “We had to draw a lot of lines. If we’d have invited all the relatives or everyone who wanted to be here, we’d have had to rent out Heinz Field.”

Ang’s picture was on every single Steeler ticket for the home game on Sept. 16, 2012. That was the season the Steelers designated “Year of the Fan.” It honored what it considered 10 of the most distinctive Steeler fans chosen by applicants who had to submit a three-word reason why they were worthy.

It was a great party. I got to meet Ang’s sister!

And the seating chart placed me at the head table right there with Ang. John told me the family consider me a pivotal figure in Ang’s legend. I’ve written about him for various local and national publications about a half dozen times. Many of the stories were displayed on a table at the ballroom entrance.

I’d seen a newspaper story about him getting into the Guinness Book of World Records and pitched the idea to National Enquirer back in about 1997 when doing wacky and fun features for them was all I did.

So that was part of the job for me. I drove out to West View and met Ang and did a story about him. It’s what I did and was paid $630 for the duty.

That I got to meet Ang, his family and friends and enjoy an afternoon at the bar was just what I guess you’d call a perk.

Again, I was just doing my job. That putting beer in my belly was part of putting bread on my table was just a happy bonus.

During one of those trips when we’d talk God, politics, football and everything in the universe, I asked him about the best years of his life. Many people will answer that general question with an epoch that had clear definition; high school or maybe college or back when the kids were kids.

Ang’s answer I think illuminates what joy this wonderful humanist gleaned from the generous portion he’s been given.

“For me, the best years were I think from when I was 35 to about 80. Those were just really great years.”

My many contributions were given flattering mention by MC John Blackstock and many family members who’d read and shared my stories.

I could never make them understand that I was really just doing my job and I was being compensated for my time.

So to me, telling Ang’s story was just part of my job in which I had a mercenary self-interest.

Becoming friends with Ang and his family, now that was a perk.

A great fan, a better man