Rabbit flies to Dallas and back for $44 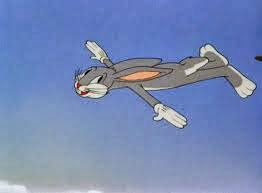 This is bound to sound like a Bugs Bunny tale, but I swear it’s true: Rabbit flew to Dallas and back for just $44.

Rabbit’s a real colorful and animated guy, just not in the celluloid way you think of  when you think of Bugs. He’s one of the six or seven United States postal carriers who frequent The Pond.

Why all these postal carriers wind up in this particular watering hole about two miles from the nearest postal facility is a mystery, as is why they call this one Rabbit. I don’t even know if he even has a real name. And actually as of about a month ago Rabbit is no longer a postal employee. He retired after 35 years of lugging mail around Westmoreland County.

I asked if they threw him a party.

They didn’t. He just danced right out the door.

I find myself thinking a lot about Rabbit these days. I thought about him again Saturday when Val and I stopped in for some beers at The Hofbrau Haus on Pittsburgh’s South Side. I was checking out the menu to see if it served hassenfeffer, which is rabbit stew.

He says we should all go with him to Dallas one afternoon and we’re thinking about it. It sounds like a perfectly senseless road trip.

See, Rabbit came into the bar a couple of months ago and said he’d just gotten back from Dallas.

No, we couldn’t. It sounded preposterous. So he showed us the receipt.

It was just as he’d said. He’d flown from Latrobe to Dallas round trip for $44. And parking at the Latrobe airport’s free.

Best part of the story? He tried to haggle for an even cheaper ticket, which I guess with Spirit would have to be out strapped to the wing.

His daughter lives there so he flew down for cheap to have some lunch with her and fly back.

Yes, here in Latrobe our retired mailmen are jet setters.

Spirit Airlines out of Arnold Palmer Regional Airport has for a few months been flying a Dallas route as one of its destinations that include Orlando, Myrtle Beach and Fort Lauderdale. If it flew to New Orleans it would mean our little regional airport is the gateway to anywhere anyone would ever need to go.

CBS Sunday Morning just featured Spirit Airlines on a segment the other day. They took shots at it for being too cheap.

How dare they. I love Spirit Airlines. They’re a huge boon to the community. Many western Pennsylvanians are foregoing flying out of Greater Pitt in order to fly from the AP airport.

CBS knocked Spirit for often being late, cramped and for charging for petty incidentals, but anymore isn’t that the industry standard? Flying commercial’s a nightmare. And that was before the only thing the major airlines used to lose was luggage.

We suspect Rabbit’s deal was available because Spirit is winding down the Dallas route that failed to draw much local interest.

So we probably have about a month to decide if a gang of us wants to fly roundtrip to Dallas for $44, which is less than it would cost us drive to Pittsburgh for an afternoon jaunt.

What would we do in Dallas?

“For that little,” Gary said, “it’d be fun to just walk around the airport.”

It sounds perfectly exotic, especially for a gang of guys whose idea of “going someplace different” involves sitting on stools on other side of the bar.

So that’s just some news about our now-retired friend Rabbit. It’s a post that covers Rabbit’s retirement, Rabbit’s good cheer, Rabbit’s travel habits and the creative ways in which Rabbit is spending his free time.

So, of course, I just had to slug today’s item whatsup.doc