When burning books is breaking news 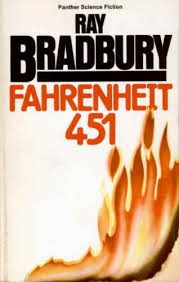 (701 words)
No matter how many times the local newscasters fool me with their “BREAKING NEWS!” banner they still get the reaction they’re always after.

I tense up. I lean forward. I steel myself for news -- real news -- that in the next 90 seconds could alter my very existence.

Hostage situation? Terror threats? Are those land-mad bastards in eastern Ohio threatening to storm the Pennsylvania border up near Youngstown?

And inevitably I’m let down.

Any more it’d be news if “BREAKING NEWS!” turned out to be real news.

Yet I fall for it every time. Happened again yesterday when I was having lunch right here at The Pond. The station happened to be KDKA-TV.

The anchor gave a hurried intro and threw right to the on-scene reporter.

“Local firefighters are on the scene,” she said, “at an area fire being fueled by the burning of thousands and thousands of . . .”

Yes? Thousands and thousands of what?

The “news” provoked a storm of bar wisecracks.

“Owners are now contemplating how to replace the valuable information that is only available elsewhere in every computer and smart phone on the planet!”

I know I shouldn’t joke about burning books. I’ve read about the totalitarian dystopia that stems from the fiery prose in Ray Bradbury’s “Fahrenheit 451.”

But these were burning phone books.

The reporter said the burnt business is the world’s largest distributor of phone books. Who knew?

It’s been years since we’ve won any sports championship but I guess in some ways Pittsburgh will always be the City of Champions.

Far be it for me to lampoon someone for having a preposterous business plan, but c’mon!

It wasn’t always that way.

Phone books were once a real cultural touchstone, as anyone who’s seen Steve Martin’s “The Jerk” can recall. Their arrival was a big deal.

I remember looking up the family name to see if any new Rodells had moved into the area (none ever did). Then I’d look up the numbers of all the pretty girls I’d be too timid to ever call.

Phone numbers back then had an essential social relevance. No more.

I used to have committed to memory the phone numbers of I’ll bet a dozen good buddies, the places where Mom and Dad worked, the local hockey rink and for sure the numbers of five really great pizza joints.

Today, I’m stumped to recall the numbers of any one besides my home, my wife, my mother and darling Jenny, that sweet, sexy tramp.

I’ve long maintained that is the last phone number any generation will collectively recall. It was a huge and catchy 1982 power pop hit for Tommy Tutone, who could probably be renamed Tommy Onehit.

Today, thanks to smart phones, our numbers have become our names.

So that’s the breaking news from Pittsburgh. To me, the real news wasn’t the fire. It was that there’s still a business that makes an apparent profit selling something nobody really wants.

At least nobody was hurt and I hope the owner is insured and can resume his livelihood.

Or not. Maybe he’s been looking for an excuse to get out of the phone book business.

Maybe he’s of a quixotic bent looking for a fresh against-all-odds challenge, a daunting way to earn money that’ll have people thinking he’s crazy to even try.

Anyone who once sold phone books for a living would certainly have the right mentality.

An alphabetically ordered world
Posted by Chris Rodell at 12:01 PM