RIP Rocco: Why people should have tails, too 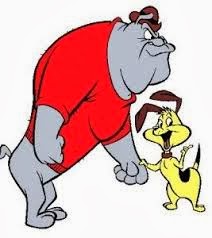 Say there’s a guy at work who acts quiet and moody. Say his name is Rusty. One of the girls might say she doesn’t like Rusty because he’s got an attitude.

Now, if he had a tail one of Rusty’s defenders might say, “Oh, I like Rusty! He’s a good boy. Every time I ask if he’d like some coffee, his tail starts wagging. He’s a sweetheart. I think one of these days I’m gonna take him home with me and let him hump my leg.”

Without tails, we suspect quiet and moody people are dangerous psychopaths. True, these days that assumption is likely correct, but a wagging tail might change our perceptions toward these pups and that might change everything.

I’ve been wondering this all week after reading two high-profile stories about human reactions to noble dogs in the news. The first involves the grieving and heartfelt tributes to Rocco, an 8-year-old German Shepherd Pittsburgh Police dog killed in the line of duty. He was fatally stabbed trying to apprehend a mentally unbalanced suspected pervert in a darkened basement of an abandoned building

The assailant, John Rush, 21, also stabbed a human officer. Rush’d initially refused orders to emerge with his hands up so, clearly, he’s one of those defective humans who years ago should have been sent to a really strict obedience school.

It’s all there in his background. An unwanted child from a broken home, mental health issues, drop out, in and out of juvie and jail.

None of that matters now. The eye-for-an-eye bloodlust for killing him is palpable. Feeding him to hungry dogs is a popular sentiment.

Of course, the outpouring of grief has produced a natural backlash from people who say, c’mon, it’s just a dog.

But these beloved dogs are, indeed, brilliant. One even wrote a book.

Or so said a bar stool friend of mine. He told me he’d read a book about a police dog and his partner and that the dog part was written as if it was the dog talking.

Intrigued, I asked him to convey the dog parts and to use his dog voice, which he refused to do when he correctly sensed I was just seeking an opportunity to have a good laugh at his expense.

Of course, it’s not a good time to ask me where I stand on the canine grief meter. I’ve for three years been burdened with a stupid little yip dog I really don’t like. He’s very disruptive for reasons I’ve yet to fathom.

There are links below to the stories I’ve written about my suspicions that maybe he’s confused about his sexual orientation or he’s either mentally challenged or else so diabolically brilliant he’s trying to drive me insane by doing things like staring straight at me every time he licks the place where his balls used to be.

I thought of Snickers right away when I saw the Taliban had taken a British military dog named “Colonel” hostage and released a video where they threatened to kill him, for once giving literal meaning to the old taunt of “imperialist dog.”

I’m convinced one week with Snickers and these guys would be booking one-way tickets on Gitmo Airlines for some nerve-settling solitude.

I haven’t seen the doggie hostage video, but read an AP report of it. The reporter said the dog looked confused, but that sometimes the fellow would wag its tail in an expression of optimism.

The story led me to believe the AP reporter grew up watching a lot of dog cartoons where the dogs wear sweaters, speak English and are dexterous enough to use things like silverware and Zippo lighters.

I sense one day we’ll read about a correlation where the more news there is about people behaving like animals, the more we love the real things.

It’ll again make me wish more people would treat one another they way they do their dogs, but understand why that’s not going to happen.

We all just know too many people who are dogs in the pejorative Islamic sense.

But I’m sure I’ll always be primarily a humanist, a man who’ll forever believe if just one person had loved Rush the way so many loved Rocco none of this would have ever happened.