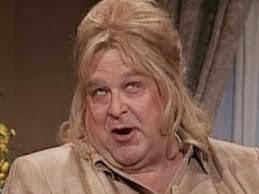 (827 words)
If you know any young guy who’s eager to break into big time acting, he’ll one day thank you for advising him to move straight to Hollywood and begin to gain 100 pounds.

There’s bound to be a glut of pretty young anorexics, but there’s only one truly great actor who can play plus-sized male roles and John Goodman can’t live forever.

And it’s becoming apparent his inability to live forever will be a real shame. I don’t think we’ll ever get enough of him.

The passing of Philip Seymore Hoffman had many eulogizing he was the best actor of his generation. And it’s hard to disagree. He’s a real sad loss.

But more and more I’m beginning to think the greatest actor of his generation -- and surely the busiest -- is Goodman, 61.

You can almost count on him being listed just below the top billing of many major releases. That’s him again this week with Bill Murray, George Clooney and Matt Damon in “The Monument Men.”

Rarely the headliner, he’s more like an essential adhesive to any quality production that needs a unifying force with which the masses can relate. In the last two years, he’s appeared in 14 major releases that have earned scores of Academy Awards and billions in box office.

He played a baseball executive with Clint Eastwood in “Trouble with the Curve;” Denzel Washington’s drug dealer in “Flight;” and big shot Hollywood producers from two different eras in “Argo,” and “The Artist,” the latter two being fantastic and critically acclaimed movies which become instantly more compelling the instant we were comforted by seeing his friendly face.

That he’s being overlooked is obvious in that he’s never even once been nominated for Hollywood’s most prestigious award, an oversight that guarantees he’ll soon be under consideration for some sort of lifetime achievement award.

It’s a career that goes back to 1975 when, in his very first role, he made a striking impression. It was Goodman in the famous Skin Bracer by Mennen aftershave ads who slaps himself in the face and exalts, “Thanks! I needed that!”

He became a phenomenon on “Roseanne” from 1988-97, never once becoming part of the tabloid circus that consumed the show.

Of course, perhaps, his most memorable role is as Walter Sobchak in “The Big Lebowski” where his every word, his every move is electrifying. As great as Jeff Bridges is as Lebowski, it’s Goodman who makes the movie (the late Hoffman’s in that, too. Remember?).

He’d be a top star if he’d never appeared on screen. He’s voiced animated characters in “The Princess and The Frog,” “The Borrowers,” “Bee Movie,” and in the role that I swear must be most like his true self, James P. Sullivan, in “Monsters Inc.” and “Monsters University.”

As Sullivan, he plays a cuddly looking fun guy who is capable of appearing really scary, but rarely resorts to frights because it’s against his sweet, gentle nature.

It says something significant about his appeal because I’m inclined to dislike him for dissing me to my face in 1997.

It was in New Orleans during the Super Bowl trip I mentioned last week. Me and my buddies snagged an illicit invite to a party at the House of Blues. New Orleans is home to Goodman and his wife of 25 years, Annabeth, where he’s beloved for his nature and generous charity work.

He and his buddy Dan Ackroyd were there that night. Both were very drunk. So were we. Heck, even the cops were all drunk. It was the Super Bowl in New Orleans.

Goodman’s been sober since ’07 and tries to attend daily AA meetings.

We were standing near the bar a few stools down from Goodman when some fans of his asked him for a picture, which they’d asked me to take. Goodman was happy to oblige and asked where we were all from.

They were from Chicago. I said Pittsburgh.

What ensued was one of those excruciating awkward moments where I couldn’t get the camera to function.

And Goodman began busting on me!

“You stupid Pittsburgh guys! What’s the matter with you? Can’t even push a button? No wonder the Steelers lost!”

I finally managed to get a good shot, but I was silently seething. How dare he insult me and Pittsburgh?

I told my friends, “He thinks a big shot because he’s been in some stupid sitcom, but mark my words: karma will get even and you’ll never hear the name John Goodman again!”

I’m happy to admit it looks like I was wrong on two counts.

Because anyone who’s endured as long as he has in such a cutthroat business is obviously talented and well-liked.

And apparently exceedingly well-named because the record makes it clear.

Goodman is a truly good man and one of our finest actors.