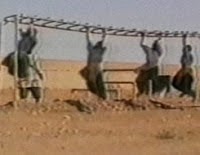 One of the great things -- maybe the only great thing -- about having written a blog for five years that relatively few have ever bothered to read is the flexibility with re-runs. I can go back and find a good topical story and re-run it as is and it seems fresh as June daisy.

Take this one from Feb. 2010. With a few quick edits, it reads like it could have been written today. And I’m still proud of it. It’s a great idea. Just think how much more compelling these Olympics would be if al Qaeda fielded a team.

But I promise I’ll never try and pass something old off as new. The very idea offends my blogger ethics. And one of these days I’ll again write about the paradox that I have more ethics as a deadbeat blogger than I ever had as a paid journalist.

Enjoy your Sunday. We’ll be watching lots of the games.

(710 words)
I’m thinking about the Olympics and believe only guys named Bob should be allowed to compete in the bobsled.

Cool thoughts on international armpits
Posted by Chris Rodell at 9:04 AM

Email ThisBlogThis!Share to TwitterShare to FacebookShare to Pinterest
Labels: al Qaeda athletes, Bode Miller still a jerk, how to improve the Olympics, Jesse Owens and Adolph Hitler, Miracle on Ice, Olympic athletes who get high