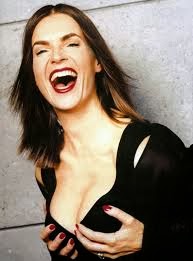 Many American observers are saying today the Sochi Olympics were a disappointment because of the stunning disappearance of the USA hockey team.

Leave it to me once again to point out the big picture.

The biggest disappointment wasn’t the disappearance of a bunch of smelly, underperforming hockey players.

The biggest disappointment was once again the complete disappearance of the competitive breast. You could almost call it an “udder” disappearance.

You’d think in an Olympics that was as hysterically anti-gay as this one, Putin himself would have done something to put breasts front and center right where they belong.

It’s a confounding fact that as the breasts of women around the world have gotten exponentially bigger, the breasts of well-trained women competing in the Olympics have all but vanished.

This became most apparent in what is mistakenly called Women’s Figure Skating, a popular event that no longer features women with figures.

They are mostly girls who’ve been raised like veal only without any of the tender succulence. They have no shape, no breasts and none of the sex appeal that seems an inherent part of the sport.

I didn’t watch that closely, but the only performer I could imagine evoking any feelings of adult raunchiness was 22-year-old Ashley Wagner. She’s beautiful and she’s a woman. A flat-chested woman, true, but still a woman.

What happened to the days of the voluptuous 2-time gold winner Katarina Witt (above)?

A friend of mine, a father of four daughters, nailed it the other night when he was complaining about feeling creepy watching the finals.

“These are just young girls,” he said. “And they have them doing these sexy maneuvers we used to see all the naked pre-med students do on Amateur Night down at the old Edison Hotel. It makes me uncomfortable seeing them flashing these little g-strings flossing their butt cheeks.”

Their skimpy outfits remind me of the old “Blues Brothers” line when Jake -- or was it Elwood? -- sings, “Baby, when you bend over I’m seeing every bit of Christmas, when you bend back I’m looking right into the New Year.”

I told my friend not to worry. He’s not a pervert.

Unfortunately, I demolished my argument by citing the pornographic musings of renowned pervert Morris Wanchuk.

That name will likely be unfamiliar to all but the most devoted fans of the great 1977 Paul Newman movie “Slap Shot.”

Played by Brad Sullivan, Mo probably has fewer than a dozen lines in the whole film, but every single one of them is filthy. He rhapsodizes about bar maids with whom he’s been intimate, leers at TV yoga hosts, and suggests some incarcerated teammates use their one call to phone -- not an attorney -- but a massage parlor.

When it’s said the Chiefs might relocate to the Sunshine State, his teammates offer bar stool toasts to the weather, the fan base, etc., and Mo says, “Here’s to all that gorgeous snatch in FLA!”

I thought of what Mo would have said when my friend wondered if he was a pervert for having unbidden thoughts of sex spring to mind when he’s watching someone launch into her Triple Lutz.

In fact, I know exactly what he’d say. I can’t recall more than six of the Ten Commandments. I forget important birthdays or when it’s my turn to pick up little what’s-her-name from swim practice. But I have almost the entirety of “Slap Shot” dialogue committed to memory.

The team on an off night went to the rink to see a troupe of comely ice dancers perform. At one point Mo opines, “I don’t like the way they cover their jugs all up with the feathers.”

Goalie Denis Lemieux tries to ignore him and says, “They are so beautiful!”

Mo continues: “They oughtta cut the costumes higher up on the thigh so you can see more ass,” to which the surprisingly prim goalie says, “You make me sick when you speak, Morris.”

The remark offends Mo's sensibilities. He shouts back, “This isn’t art. This is sex!”

So but that standard my friend is no pervert.

If you’re going to dress these little girls up in sexy costumes, no one should be surprised when grown men are confused by sexy thoughts.

I propose they no longer allow mere children in the Olympics until they are either fully developed or are at least old enough to afford a decent boob job.

So there you have it. I know the games are over, but it’s something I just need to get off my chest.

These days that takes what I guess you’d call Olympian effort.

Where are all the Olympic breasts (from ’12)