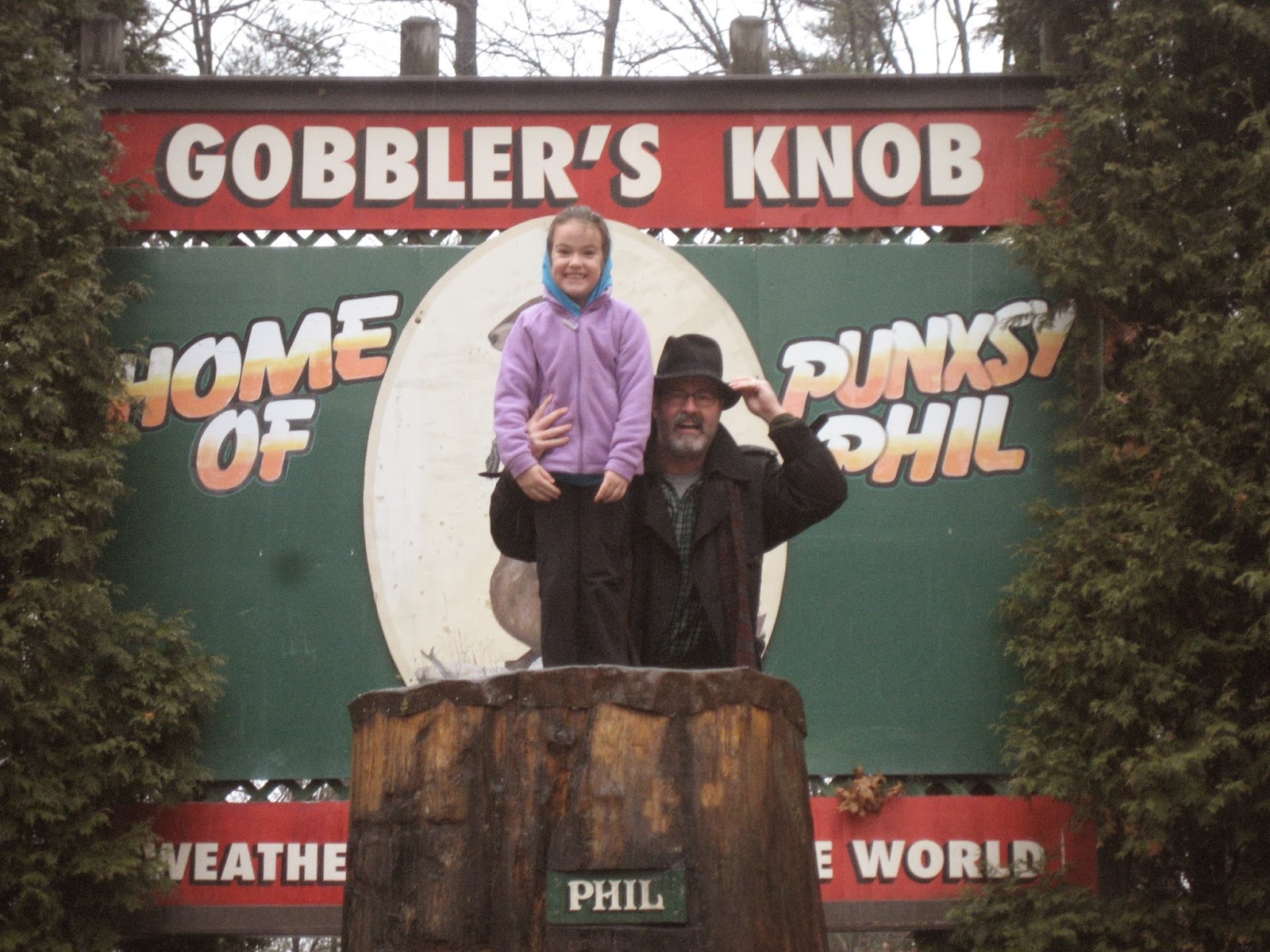 (962 words)
If the NFL is determined to have more Super Bowls in cold weather neutral venues, then I have a suggestion:

There were no logistical problems. We didn’t get stuck in a subway. We walked everywhere. No one thought it necessary to subject the 7-year-old to an unseemly pat-down. Best of all, we had an opportunity to get our picture taken with Phil, the groundhog who on that day was a goat for having seen his shadow.

My kids at the Super Bowl could never could have gotten anywhere near Peyton Manning, the Bronco who on that day was a goat for having played like a dog.

For New York to deal with crowds equivalent to Punxsy’s, it would take all 40 million Spaniards to simultaneously decide they preferred football to futbol and pack their big foam fingers and head to Manhattan.

And now a word from our sponsors . . . As the commercials have now surpassed the game in national interest, I’m going embed this story with commercial break reviews of the spots I liked . . .

The only person who had a better day than Russell Wilson was Bob Dylan. I liked  hearing his ’66 hit, “I Want You,” but thought the ad featuring the giant grizzly  tearing apart a small country market in search of Chobani Yogurt was confusing. But I loved where Dylan took the reigns from Clint Eastwood as the iconic voice for a pro-Detroit message with “Things Have Changed” playing in the background. My friend Chris Foreman said the ad reminded him of Krusty the Clown’s Canyonero ad, hinting it was a massive sell-out. But you have to remember he’d in 2004 done Victoria’s Secret and, anyway, I’d buy a Canyonero off Krusty, too, so it’s all good.

Being in Punxsutawney sober and responsible for children made me nostalgic for days when I was childless and often inebriated. But great swaths of life for most of us now involve parental sobriety so there’s no point in quibbling.

It also reminded me of the contrast between my friends and my family. I’m buddies with several platoons of guys who if I asked, “Hey, wanna go to see Groundhog Phil?” would be ready in 20 minutes for a week-long mission. I know about six of them who in that time could pack and acquire moonshine!

You wouldn’t believe the cajoling it took to get our girls to go. But we went and had a great time -- even though as part of their agreeing to go meant not leaving until 9 a.m.

I was actually fine with that. We watched the whole thing on TV and had Gobbler’s Knob all to ourselves when we got there at 10:30 a.m. And the town’s very festive. It’s great Americana. It means more to me maybe, too, because my Mom’s a Punxsy grad (Class of ’50).

I loved the Volkswagen angel wings, the Radio Shack with 80’s pop culture icons from ALF to Mary Lou Retton, and the happy-and-you-know-it Heinz ads. I thought the Bud Light one with the unknown who wound up playing tiny tennis with Arnold Schwarzenegger was great, too. And Colbert’s head-peeling pistachio ad was well-done. I love Colbert.

Chicago has cows, Pittsburgh has dinosaurs, but Punxsy, of course, has groundhogs. Those are the colorfully decorated fiberglass figures on every corner. The girls counted 19 of them.

We also saw at least one human groundhog wedding -- and I’m not inferring bestial unions. They were man and woman. I don’t know how any prospective bride or groom decided a Groundhog Day wedding in Punxsutawney is the way to launch a marriage, but apparently it’s not uncommon.

Then there’s this: The all-male/all-white Groundhog Inner Circle is certainly the most discriminatory civic club in America. For Pete’s sake, even Augusta National’s more diverse. Still, I figure America will forgive Phil’s misogynistic bigotry because he’s just so darn cute.

The halftime show basically sucked, although I found Bruno Mars to be an appealing entertainer. But whose idea was it to stage him with the Red Hot Chili Peppers? It was terrible. Why NYC icon Billy Joel, who is currently touring, wasn’t there is a mystery. I can’t fathom which demographics the NFL was targeting by pairing these two.

Another mystery is why Bill Murray’s “Groundhog Day” is so hard to find on Groundhog Day when it is to the holiday what “It’s a Wonderful Life” is to Christmas. It’s that good. Val found an airing at 10 p.m. last night, but it wasn’t on demand and the local Family Video said it was out. Watching it in front of a fire upon our return would have made for a perfect day.

Chris Foreman also pointed out the so-called Seinfeld “reunion” was the most disappointing event since the Seinfeld finale. I agree. And then there’s this: of the multi-millions spent on Super Bowl advertising, I didn’t see anything that will alter in the least any of my current spending habits.

As we had lunch in Indiana, just a short distance from the Jimmy Stewart Museum, yesterday gave us an opportunity to brag that we hit the Orion’s Belt of Pennsylvania iconography. That is all within an hour of one another, we saw homages to Groundhog Phil and Jimmy Stewart before returning to our home here in Latrobe, birthplace of Arnold Palmer, Fred Rogers and the two little Rodell girls who can now say they’ve been to Punxsutawney on Groundhog Day.

I don’t know how you can have a Super Bowl without at least one ad featuring a talking monkey.