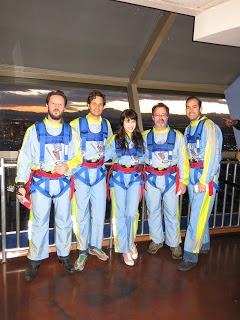 Last year this week, I embarked on a really sweet junket to Vegas to enjoy the kind of high adrenaline stuff you find far from the plush felt gaming tables. These stories still get lots of hits, particularly this one about doing the Skyjump at Stratosphere with Playboy Playmate Claire Sinclair.

So let’s start with SkyJump at the Stratosphere because it was the most exhilarating activity and the only one that involved at least a little nudity.

So one week after turning 50, there I was on the Stratosphere’s 108th floor observation deck with three other reporters, our gracious host, and to add a dash of Vegas surreal, the voluptuous Claire Sinclaire.

It’s a common misconception that this is a bungee jump. In fact, it’s considered a controlled decelerator descent. You’re tethered to three wires that govern how fast you fall. A jump costs $109 or about a buck a floor.

Lies about length & the manliest of men