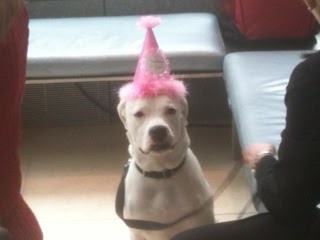 (697 words)
One of Pittsburgh’s nicest hotels isn’t going to the dogs. The dogs are going to it.

Val and I attended a swank doggie birthday party yesterday at the Fairmont hosted on behalf of Edie, a 3-year-old boxer lab mix (above) who spends her days in the lobby of one of Pittsburgh’s most posh properties.

They had a lobby party for her and about 20 local dogs, many of them from Pittsburgh’s Animal Friends shelter.

It was the only party I’ve ever been to where bitch, bitch, bitch didn’t turn out to be a real drag.

I was invited, I guess, because I wrote a travel story about Edie and the Pittsburgh Fairmont in 2011.

Back then Fairmont hotels were on a bona fide hiring binge of fidos who preferred bones to bucks -- and you get bonus points if you can guess which lines I’m lazily lifting from that old piece (that’s one).

Animal loving hotel management thought it would relax the lobbies to have a gentle pooch lounging around. So they began working with Circle Tail companion dogs near Cincinnati to locate the perfect lobby dogs.

Anyone who’s seen “The Pink Panther” knows, lobby dogs can be problematic. In the movie, Inspector Clouseau approaches a pooch and asks the front desk clerk, “Does your dog bite?”

So Clouseau bends over to give the pup a friendly pet. That’s when the dog nearly snaps Clouseau’s fingers off.

Incredulous, Clouseau says, “I thought you said your dog does not bite!”

I really have to get busy re-pitching the story of Edie to travel outlets because it’s a great story. See Circle Tail sounds like every other canine obedience school. It is not.

Part of the rehab involves each dog spending months in a local state prison working with inmates devoted to socializing once-neglected animals -- and I imagine there’s some very poignant kinship in those relationships.

Edie was chosen as perfect for the Pittsburgh Fairmont because she’d failed at task competence. She was incapable of work. She could only schmooze.

So you have Edie, an orphan dog who flunked out of school, did time in prison and still landed a cushy job where she gets to snooze thorough work and still get lavished with praise and gourmet treats just for being agreeable and not pooping on the floors.

Nice work if you can get it.

She’s also exempt from the hotel’s policy that frowns on employee fraternization. She spends most of her nights with the hotel’s public relations director, but will once in while go home with others.

So she doesn’t get in trouble for sleeping around. Lucky pup.

We were only there about 30 minutes, but I really enjoyed it. It had me missing my dog.

Not Snickers. That’s my daughters’ dog. I miss our old dog, Casey, the sweetest and most stupid Golden Retriever that ever lived.

Snickers is the world’s most high-strung dog, the antithesis of what I want for my home, the place I go to seek solace.

His pedigree is mysterious. A sidewalk stranger dumped him on our daughters and disappeared. The girls say he must be a little terrier and a little shih tzu -- and the phonetic pronunciation of the latter is too obvious for even me to touch.

I’ve speculated he’s a little Moe, a little Larry and a little Curly. Collectively, I love the The Stooges, but just imagine if you combined Moe’s meanness, Curly’s violence and Larry’s stupidity and distilled it all down into one four-legged body.

I re-read this link to this 2010 post I succinctly titled “I hate my dog” to see if my feelings have softened. They have not.

I tried to think how it would have been if we’d have brought Snickers to Edie’s party. It would have, I’m sure, been hell. He’d have yipped the whole time, strained at the leash like a lunatic and probably peed all over my church shoes.

Understand, the invitation said we were welcome to bring him.

Maybe I missed an opportunity.

The invitation said nothing about having to bring him back.