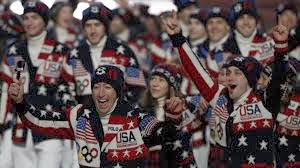 USA plays Canada in Olympic medal round hockey with the puck dropping at noon. Know what that means? The bar will be packed with hockey fans easing into the weekend and -- guess what? -- I think we’re going to win!

Need more reasons to cheer? There’s not so much as a flake of snow in the forecast!

Of course, some of that could change and the whole mood would be ruined. Canada could beat America, the weather could turn disruptive and, wham, it could be Monday morning again before we know it.

That could only mean one thing.

Or should it be bhoo!

So much Olympic broadcasting has me realizing how much time we as a people spend either booing or whooing.

But why do we whoo?

It’s a nonsensical word. The Oxford English Dictionary calls it an “exclamation of surprise, grief or other emotion; an imitation of an owl’s hoot.”

I take exception to the secondary definition.

No sports fan alive has ever said “Whoo!” with the hopes of appearing wise or owl-like. That word is spelled “Hoo! Hoo!” And you know what it means when you hear “Hoo! Hoo!” in your holiday evergreens, don’t you?

Owl be home for Christmas.

I spent a little time last night trying to learn the history of whoo, something decidedly different from the history of woo, which implies romance. For example, “He was pitching woo.”

I use that example because it’s so common, even as I know it could lead to some confusion on the part of Taiwanese readers who remember a pitching Wu (Wu Jung-yi) who in 2003 helped lead his Brother Elephants to a 6-1 win over the Sinon Bulls in the Taiwan Series before 10,500 cheering fans in Taichung.

I wonder if any of them that night whooed for Wu.

Although the expression’s been around for four centuries, I think whoo is in a golden age thanks to Homer Simpson who is known for saying “Whoo! Hoo!” when he finds things like stray chicken wings in his trouser pockets.

Remember at one time, a popular cheer was the now stuffy sounding, “Hurrah!” Today, anyone caught yelling “Hurrah! Hurrah!” at an athletic event would be interrogated on suspicion of being a subversive time traveler.

I wonder when “hurrah!” began falling out of favor. I know it wasn’t until after Johnny came marching home again. Hurrah! Hurrah!

It’s still a very stirring song, but I suspect its essential poignancy would be diminished if instead of singing “Hurrah! Hurrah!” we’d exclaimed the equally euphoric “Whoo! Whoo!”

Of course “Whoo!” is heard in countless great rock ‘n’ roll songs to great effect. But it can be overdone. I think Pete Townsend understood this when he named his band “The Who” instead of “The Whoo!”

One of our greatest rock songs is embedded with some phrasing that leads many people to mistakenly conclude it has a lot of chanted whoos. It’s “Sympathy for the Devil,” and the fact is something I always point out whenever it comes on and I’m with another listener. Happened in the bar just the other night when it was just me and the bartender.

“Ah, hear this. You’re to be excused if you believe the background chorus is chanting, “Whoo! Whoo!” In fact, they’re singing “Who? Who?” Mick Jagger is throughout the song quizzing us. He’s saying he’s responsible for committing all these unspeakable evils throughout the ages and insistently demanding we guess his name. But as the sinister imagery increases and is propelled along by the jungle rhythms, the background singers, likely Keith Richards and Brian Jones, begin to implore “Who? Who? Who? Who?” as if not knowing is driving them mad until at last Jagger reveals he is, indeed, Lucifer, The Prince of Darkness. What do you think of that?”

“I think it would be nice,” the bartender said, “if just for once you’d shut the fuck up so I can enjoy the song.”

I thought I’d found enlightenment on a webpage enticingly called “The History of Whoo.”

It turns out Whoo is also a prominent Korean cosmetics manufacturer. It’s a great name for people who make lipsticks: “One kiss from a girl wearing Whoo and it’s Whoo! Whoo! Whoo! all night long!”

But I was disappointed. All the page did was try to sell me Korean cosmetics, too drastic a lifestyle change for me going into a Friday afternoon when I’m eager to watch Olympic hockey.

So it’s something to consider next time some youthful Olympian does something that makes you cheer.

Well, looks like I made it through another week without doing any real work while still managing to keep all the pesky bill collectors at bay.

Cheer up, America!
Posted by Chris Rodell at 9:33 AM

Email ThisBlogThis!Share to TwitterShare to FacebookShare to Pinterest
Labels: Cheering for USA, history of Whoo, Homer Simpson Whoo Hoo, how'd the Who get its name, players named Wu, the word Hurrah, the word Whoo!, When Johnny comes marching home