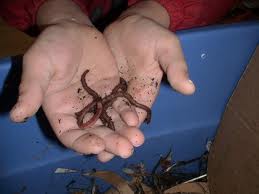 (762 words)
As I spent much of the weekend up to my elbows in warm, wet worm poo, it occurred to me I’d make a really great God.

Well, at least a really great worm god, and for the sake of worm humility let’s keep the great worm god all lowercase. I’ll do anything for my worms.

As I do every year, I tidied up my little worm farm in preparation for taking the slick little critters in for an Earth Day extravaganza at my daughters’ elementary school.

Those of you who care about such things believe Earth Day was last week. Not for me, it wasn’t.

No, today is Earth Day. So is tomorrow. And so is the day after that. I celebrate Earth Day every day of the year. There’s not a day that goes by when I don’t do something to try and make the world you and I share more hospitable.

I reduce, reuse and recycle like a maniac. Someday I think my entire fitness regimen involves dashing head down across shopping center parking lots chasing after windblown trash. I don’t mind looking like an idiot doing it and believe it helps keep me fit, at least until some guy in an gas-guzzler HumVee runs me right over.

But it’s as a proselytizing worm farmer that I have my greatest impact.

This will be the sixth year I’ve been invited to speak to my kids’ classes about worm farming. It’s always a lot of fun and I know I’ve made a real impact on hundreds of kids, many of whom through no fault of their own are being raised by morons who don’t recycle.

I always consider it a successful day when I can depart assured many of the kids will become avid recyclers and that none of the first grade boys ate any of my worms.

Worms fascinate me. First of all, they are what I call ambi-sexterous. Yes, it takes a trained eye and I’d guess an atomic level microscope to notice, but every worm is a hermaphrodite generously bestowed with reproductive organs of both sexes.

As it was explained to me, “These worms simply live to eat and reproduce. Basically, the worm is just a mouth, anus and a microscopic little brain.”

I asked, given these base characteristics, how the red wiggler worm differed from your typical radio talk show host.

“Well, the worm actually contributes some good to society. About 45 percent of all our waste stream comes from food and paper products, both of which are compostable materials. Worms can convert these common waste products into nutrient-rich soil fertilizer to energize your gardens.”

Oh, how I wish I could find one wise worm capable of answering my questions about its eco-heroics.

Of course, my questions would probably bore your typical red wiggler causing it slither away to go have sex with itself.

I consider myself a true humanitarian, someone who cares about his fellow man. In fact, I’m what I guess you’d call a wormitarian.

I’ve met and endured many people who are absolute jerks, but I’ve never met a worm for whom I didn’t extend the highest regard.

To me, each one is precious. That’s why I felt briefly like I was the great worm god this weekend.

A big part of worm farming is sifting all that nutrient-rich worm poo for compost. Some worm farmers, I’m sure, just carelessly toss many worms in with the compost.

Not me. I take great pains to ensure none of the worms get taken away from their worm family.

This, I realize is stupid even as I’m doing it. Worms don’t seem to have families and if they do they aren’t very sentimental. My wife sometimes criticized me for that, but when my mother dies I promise you I won’t just eat her like she’s some old celery stick, as worms do when another worm dies.

But I did surprise myself with the my tender feelings for my worms.

I wonder some days I should maybe cease helping my fellow man in favor of helping the noble worm.

Maybe then people would see me walking down the street and say, “There goes a real worm god.”

Or maybe they’d say, “God, there goes a real worm.”

Either way, I’d take it as a real compliment.