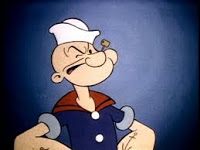 No particular reason for the appearance of this one from last April, other than I've always been partial to it. We're spending the day cleaning up the yard, fixing the trampoline, etc. Feels great to be outside without clothes on again!

Well, you know what I mean.

Email ThisBlogThis!Share to TwitterShare to FacebookShare to Pinterest
Labels: Apple iProducts, Ido language, Paul Aertker, Popeye the Sailor Man, the history of Apple i's, what does the i in iPad mean