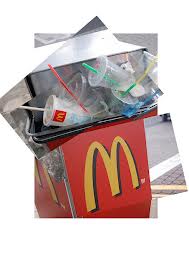 (780 words)
I’ve tried to temper my criticism of the demographic after people who use straws said I hurt their feelings when I pointed out they really suck.

It’s been my contention for years that the innocuous-looking straw is a pernicious waste and emblematic of our runaway pollution problems.

One estimate says McDonald’s alone issues 60 million plastic straws a day. Get a drink, get a straw. It’s like that at nearly every eating establishment in America. Same goes for bars and nightclubs where straws are thoughtlessly dispensed with every iced drink. And you get a new straw every time your drink is refreshed.

These straws do not get recycled. They wind up in landfills or float down the gutters into the sewers and eventually attache themselves to the world’s biggest trash disaster, the Great Pacific Garbage Patch -- and I urge you to check out my innovative solution to that environmental catastrophe following this rant.

My point is the waste is colossal and an affront to anyone who cares about the environment or logical thinking.

See, once any human with at least one arm and an opposable thumb gets past the sippy cup stage, the straw is an utterly superfluous device.

And saying people who use straws suck is to me an irresistible bit of wordplay.

Because suck they do.

Society has yet to dumb down to the point where it needs instructions for straws -- give it time -- but when it does the instructions will say, “Put one end in drink, the other end in mouth and suck! Suck! Suck!”

So for about two years, now I’ve been gathering our unused straws the waitresses reflexively dump on our table and putting them in a plastic grocery bag in my office.

My plan is to in about a year create a penis-shaped work of art constructed entirely from straws and then dare leading art critics to say it sucks.

In the meantime, I’ve begun to take the fight to the enemy. Yes, I’m starting to refuse straws.

If the smiling waitress brings our table four straws, I say, “Thank you, but we do not need straws. We’re all capable of consuming our refreshments by picking up the glasses and raising them to our mouths the same way cavemen did with coconuts. We do this for our daughters, for Mother Earth and for you, my dear. We want you to grow up in a world free of senseless pollution.”

Just once I’d like one of the girls to euphorically thank me for the gesture. Instead, they usually become so cold and distant I wind up worrying they’re in the back hockering on my meal.

It’s even worse at the drive-thrus where it’s like they worry they’ll be punished if they don’t meet some murky straw quota.

Happened to me again Saturday morning. I was grabbing a sausage McMuffin (no egg) and a small Coke to fuel me through some morning productivity.

It was right in the middle of the morning rush, cars lined up around the building.

I paid at window No. 1 and inched my way to the second window.

The girl was about 17 and her face bore the harried look of a fast-food frantic. Clearly the fast food wasn’t going fast enough.

“And one small Coke?”

I could see her left extending more than just one small Coke. Snug to the drink was the object of my loathing, one eight-inch straw encased in its little sanitary paper prophylactic.

It was like it was happening in slow motion. I extended my left hand, palm out and began saying, “I do not need the straw. Straws are wasteful little . . .”

She was in no mood for drive-thru behavior deviation. Her eyes narrowed and met mine.

She had no intention of withdrawing. I knew if I didn’t seize the offering it would all wind up in my lap.

“If you don’t want the straw there’s a trash can across the parking lot.”

She turned and the little window began to slowly close.

What I did next reminded me of the scene where Indiana Jones reaches to recover his hat as the wall closes, only in reverse.

I deftly speared the straw back through the narrowing window and struck her square in the back of the neck as she was bolting away.

I could hear her shouting angry profanity as I pulled away. I couldn’t make out exactly what she said, but I know this.

If she said I sucked, she is a girl with no sense of irony.