That's MISTER Shrapnel to you! 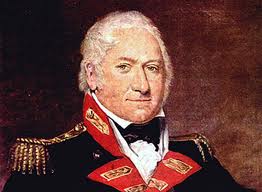 That’s a lot of lethal mayhem for a guy who’s been dead since 1842.

Ladies and gentlemen, allow me to introduce Henry Shrapnel.

The nature of his game is death.

I learned last November during a tour of the Gettysburg battlefield that shrapnel was a dude.

The information struck me as so odd, which is better than having it strike me as nails, ball bearings and shell fragments.

I’ve been hearing war news since I was old enough to hear. So shrapnel’s been with me my hole life. It’s one of those words that seems to instantly convey exactly what it is even as the word itself offers no clue.

I have trouble wrapping my still-intact brain around the fact that shrapnel is nimble. It is both explosively propelled fragments of death and a white-haired old grandfather.

It is a thousand pitiless metal shards capable of tearing off your leg and a country gentleman who probably enjoyed gardening in his fine English estate.

Henry Shrapnel was born in 1761 in quaint Bradford on Avon in Wiltshire, England. His portrait shows a handsome gent whose mirthful eyes twinkle like he’s about to ask a small child to pull his finger.

He spent many mornings waking up figuring out ways to kill people with whom he disagreed.

In 1874 he was a lieutenant in the Royal Artillery. Back then he could fire a cannon ball at any sharp-eyed infantry and they’d see it coming and take a quick self-preservational step to the left or right, maybe with their tongues sticking out. It frustrated him when the shot would punch a hole in maybe a barn and not one in some angry Spaniard.

So he invented a hollow projectile that discharged via a timed fuse. He loaded the casing with shot that would rain down and through enemy personnel.

That was in 1803 and 210 years later the very same principle is still widely used, as  was evidenced in the Boston Marathon bombing.

It was a game changer weapon and in 1814, the British government recognized his achievement and awarded him 1,200 British pounds per year -- about $90,000 -- for life.

He lived to the ripe old age of 80 and died in 1842 at his grand estate in Southampton.

I guess one of the reasons I’m surprised shrapnel is Shrapnel is because I’ve never met nor heard of another Shrapnel, while I have heard of billions of shrapnels.

It would be different if I’d have ever met a Burt Shrapnel, a Frank Shrapnel or maybe a Mick Shrapnel. I guess the closest would be a Mick Jagger, which is sort of ballpark.

I found an interesting website called www.HowManyOfMe.com that claims to know the exact ranking of every single proper and surname in America.

It says there are fewer than 117 people in the U.S. with the last name Shrapnel.

By contrast, it says there are 519 American Rodells. I know exactly nine of them, including one Chris Rodell who Facebook friended me when he saw we have the same name.

He lives in Montana, seems friendly, and as far as I can tell the only things we have  in common are we’re both on Facebook and we’re both named Chris Rodell.

I’m glad none of the other 510 Rodells have so far done anything notorious. I vaguely recall my father telling me he’d once read Rodell is Hebrew word that means “Little Wheel.”

One of these days I promise to look into it.

For now, I’m just glad I’m not Chris Shrapnel, although that might become my stage name if I ever decide to engage in professional mixed marital arts.

I think it would be tough going through life with a name that connotes so much bloody death.

I’m right now happy being who I am, a little wheel forever eager to get on a real roll.

It’s time to sell hurricane naming rights
Posted by Chris Rodell at 11:22 AM