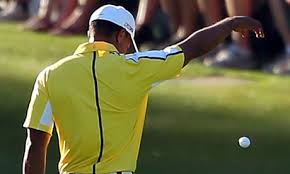 (764 words)
This is the time of year when golf fans ask me if I want Tiger Woods to win five more majors to beat Jack Nicklaus’s record of 18.

So do I want Nicklaus to remain golf’s all-time champion?

What do I want?

I want Arnold Palmer to win the next 12 majors to beat Nicklaus and become the consensus greatest golfer ever. If this happens, Palmer will win his 19th major about three years from today at the 2016 Masters. He will be 86.

This would be cool because it would mean next year he’d be the first golfer to go from being the ceremonial starter, an honor he enjoys with Nicklaus and Gary Player, and just keep going down the first fairway to win golf’s most prestigious major.

Palmer, one of the world’s greatest pitchmen -- and greatest guys -- is on the cover of my book advising readers to buy it, but that’s not why I’m rooting for Palmer to go on a senior tear.

I’m rooting for him because I no longer root for sports people. I root for interesting sports situations.

Up until about three years ago, Tiger winning was very interesting. He was very compelling and everybody loved him.

Then we learned about two dozen women loved him more than the mother of his children and that one of them schlepped pancakes down at a Perkins Restaurant in Orlando.

That was all very interesting, indeed, especially for those of us who are casual about adhering to Biblical admonishments about leaving all the moral judgements up to God.

I don’t think I’ve ever really rooted for Tiger since. He inhabits some odd middle ground where I enjoy seeing him do well enough to practically taste victory and then watch it all slip away for reasons usually beyond his control.

That’s why this Masters was so fascinating.

On Thursday at the par 5 15th hole, Woods hit his best shot of the tournament. The ball hit the stick -- the bullseye -- but cruelly bounced back into the water.

It was an incredibly bad break.

Then things got really interesting. Tiger took a deliberately illegal drop -- and if you’re unfamiliar with golf  “illegal drop” has nothing to do with the removal of his pants.

He broke the rules. Tardy Augusta rules officials assessed him a two-stroke penalty  about four hours after he’d left the grounds.

That means his signed scorecard was in error and precedent meant he should have been disqualified. Argentinian Roberto De Vicenzo at the 1968 Masters signed an incorrect scorecard -- one that included a number higher than his actual score and was written by an opponent -- and had to forfeit the championship.

If you’re a person bestowed with even a grain of common sense you’re right now probably thinking that’s the most stupid thing you’ve ever heard. And you’d be correct.

But Masters officials found an obscure rule no golf fan had ever heard of and said Tiger was not disqualified, preserving his presence and guaranteeing a TV ratings bonanza.

In maybe that one slim regard I’m on common ground with the poobahs who run the Masters. We’re happy to ditch our principles if it keeps things interesting.

But the golf world went into an uproar. Men who normally yell, “Get in the hole!” found themselves yelling “WTF!”

They say if it was any golfer other than Tiger Woods, then that golfer would have been bounced.

Many were saying Tiger should have disqualified himself, and that would have been a very noble gesture. So noble I would have urged Masters officials check to make sure the real Tiger hadn’t been abducted and replaced with some do-gooder shape-shifter Tiger.

It would have been very uncharacteristic of a man who more and more appears craven in a maniacal quest, like he’s chasing some great white whale -- and please don’t mistake that as a shot at Nicklaus’s growing girth.

Know what I was hoping would happen?

I was hoping Tiger would beat the field by four-strokes -- the number that one unlucky hole cost him -- and then on the 18th green put his ball in his pocket, automatically giving the victory to the runner-up.

It would have given him a de facto win sports fans could forever argue over and it would have been the classiest gesture in sports history. It would have completely changed our perceptions of Tiger.

It would have made for a very interesting weekend.

Especially if the runner-up to whom he’d forfeited the victory was Arnold Palmer.