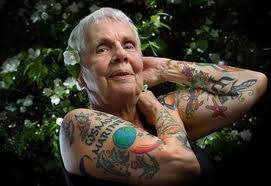 (647 words)
It’s reprehensible, I know, but I’ve spent years trying to convince our daughters that their 80-year-old Nana has a faded blue battleship anchor tattooed on her ass.

“Now, she’ll deny it’s there,” I say. “She’ll pretend it doesn’t exist. But it’s there. She got it in 1944 when your grandfather enlisted in the Navy.”

Visiting my mother can be at times tedious and watching my two daughters, ages 12 and 6, chase Nana, 80, around her apartment while tugging at her britches makes it all worthwhile.

I’m thinking of my own mother here.

For all I know, maybe the old gal does have a tramp stamp. Everyone else these days seems to have one.

We were talking tattoos in the bar just yesterday and here’s my conclusion: girls, excessive tattoos are maybe the best repellent to paunchy middle-aged men with receding hair lines and a biological disposition to midnight beer farts.

Yes, we Prince Charmings find skin art distasteful. Men my age don’t mind sloppy dress, poor grooming or hillbilly haircuts. But we draw the line at all the tattoos.

I tried to discern just what it is about tattoos we find so off-putting and I think I’ve found the answer. It goes goes clear back to our adolescence when we spent all our time dreaming of seeing girls naked.

And this is a guy universal. No 16-year-old boy’s ever dreamed of seeing a girl in sexy lingerie or all dolled up as a teasing French maid. That pimply kid has no appreciation for subtlety or nuance. He could be in a room full of Victoria’s Secret supermodels and he’d close his eyes.

Not because he was overcome with shyness. It’d be easier to imagine them all completely naked.

A girl with a lot of tattoos is never truly naked.

And when you think about that through our adolescent minds -- and rare is the man who’s evolved even a bit in that regard -- it is perhaps life’s cruelest frustration.

There’s a beautiful girl in her mid-20s who works at a bar we get to every once in a while. And she’s wonderful. Great smile. Great sense of humor.

Last year she started getting lots of very vivid tattoos from the neck on down. There are rainbows, storm clouds and silver unicorn bounding through what I guess you’d call her left breast meadow.

They’re so expert I believe they ought to be framed and put in a museum.

If they were, guaranteed, I wouldn’t fumble with the frame to try and peek behind the canvas.

Every time I think tattoos are becoming passe, I see another example of how out of step I’m becoming with today’s pop culture.

I am heartened that we’re starting to see an increase in popularity of more practical tattoos, which is kind of a way clever people have of saying a fad has reached a tipping point.

You can check out some interesting ones here. They include a wrist ruler, belly subway maps, forearm medical alert information including instructions to not resuscitate.

It would ease tensions if more people came with public service instructions like, “Feed Donuts When Cranky.”

I wonder how it’ll all play out a few years from now when my daughters are able to decide for themselves whether they want to tattoo.

I guess it would serve me right if they both turned up one day with great big ass anchors to honor their Nana.

• Time on my hands & everywhere else

• Who’s the worst man in America?
Posted by Chris Rodell at 2:20 PM