Matt Lauer's got the blues 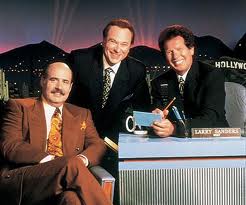 (738 words)
I may do something next week I vowed in June I’d never do again. Yes, I’m going to tune in one morning to watch the “Today” show on NBC.

It’s true. Apparently, he’s being besieged by New Yorkers who shout mean things at him over his apparent role in having beloved co-host Ann Curry ousted this summer.

TMZ reports Lauer is “miserable” and “freaked out” over things that people have screamed at him in the street, like, “You're a bad guy,” and “You got Ann fired. Does that make you happy?”
Reports also say he’s hearing sarcastic comments about his $25 million annual salary.
If I was earning -- or “making” is the better word --  $25 million, I’d be so deeply cocooned in a protective bubble even the now zipper-thin Al Roker would be incapable of slicing his way in.
And now there are new reports that Curry, who has nothing to do, is begging NBC to let her out of her contract so she can bump Anderson Cooper, the vapid dandy at CNN, from his prime-time role.
All this is happening as rating continue to tank.
Want a prescription for a morning ratings smash? Stop filming all those tedious pseudo news segments and let us watch the “Today” show cast and crew interact unfiltered.
Late film critic Gene Siskel used to have a simple and effective rule about reviewing films: He’d ask himself,  “Am I more interested in watching this movie than I would be watching a documentary of the actors in this movie having lunch together?”
That’s where we are with “Today.” I can’t stand watching the hosts pose as giggly chums and would rather watch the gritty tensions of what happens after they go to commercial. I’m sure it would be highly entertaining.
I know this because that’s the exact premise for one of our favorite shows of all-time, “The Larry Sanders Show,” the uproarious Garry Shandling satire that ran on HBO from 1992-98, and is now running uncensored -- it’s a real profanity fest -- on IFC after midnight. We DVR them all and often watch them with lunch.
It’s a behind-the-scenes gape at a vain and neurotic late night host (Shandling), his sycophantic staff, and all the gigantic egos that clash in trying to put together a daily network show. Real life celebrities like Tom Petty, Sharon Stone, Dana Carvey, and Carol Burnett play themselves as guests on the show.
It’s hilarious.
I suspect there’s a lot of entertaining pettiness going on every day at “Today,” and “Good Morning America,” too, I bet (I’m now devoted to “CBS This Morning,” the only morning news program aimed at grown ups).
The posing that goes on in these alleged news shows is infuriating. Everyone’s so cuddly and sweet to one another and all the cloying laughter over lame jokes is exceeded only by the bone-headed ex-jocks and coaches on the NFL pre-game shows -- and they at least have a history of multiple concussions to excuse the unseemly giddiness.
What pains me most is that an entire generation of future newscasters is growing up believing that acting zany and unctuous is the only way to succeed in the news business. It wasn’t what I was taught in journalism school. Lauer, either, I know.
You see, both Matt and I attended journalism classes at Ohio University at about the same time. Really, we could have been buddies.
It’s true. Our OU years nearly overlapped. That’s only a glancing familiarity, sure, but I guarantee we’d be instant friends if I told him I used to do most of my non-bar loafing at the porch apartment above Roberts Menswear on Court Street.
It’s an iconic address for anyone who’s ever spent time in Athens. Lauer lived there.
I was best buddies with the guys who moved in there shortly after Lauer left.
The apartment had a porch that overlooked the college green. The parties there never stopped.
I’ll bet Lauer misses those simpler times before his ambitions got the better of him.
It’d probably be good for his soul to go back to Athens.
Sure, he’d still hear a lot of people on the sidewalks shouting that he sucks, but it wouldn’t be from people who think he was mean to Ann Curry.
It’ll be from his old journalism professors.